Book 6: The Man and the Monster. 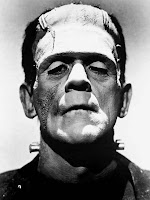 I am sure somewhere in my school career I was supposed to read Frankenstein by Mary Shelley. And I am about 100% positive that rather than reading about the monster I decided to go to sparknotes.com and just read the summary. In fact, I know that I didn’t read it in one of my college classes because I fell behind and luckily for me, it was one of those classes where you could choose your essays on the test and I simply picked the ones not about Frankenstein.

To be perfectly honest, I don’t know what I had against Frankenstein. Perhaps I thought the book had to do a lot with the monster and would leave me trembling in my bed at night. This explanation makes sense seeing as after I saw the movie Signs I slept with a glass of water by my bed for over two weeks to splash on the aliens. And that I almost cried in I am Legend and the new King Kong. Matt laughed at me both times while also cringing as he tried to dig my nails out of his arms.

I am hoping by this point that you understand one thing: I am a huge chicken when it comes to anything remotely scary. My junior year of high school I scheduled a counseling appointment to talk about colleges on the day I knew we would be watching Poltergeist in class because I was afraid I would start crying. So yes, I am a chicken and perhaps that is where my fear of reading Frankenstein stems from.

The truth is, the book is not really about the scary monster who is trying to eat people and do other monsterish type things (or at least I am not to the bonecrushing, screaming, murderous part just yet, if there even is one). Instead, it seems to be more about Victor Frankenstein, the creator of the creature and a man who is just as much a monster as his monster.

Victor creates his creature out of deep loneliness and a desire to show off his skill and intelligence. Throughout the long process of creation, he never once thinks of the destruction and havoc of what he is doing, or what others will think of his experiment. Instead, he is selfish and only cares about his work, which is proven when his family writes to him saying they have not heard from him for some time.

It’s not until the creature actually opens its eye and looks at him that Victor realizes the implications of what he has done. He has purposely created something stronger and taller than man that can walk and eventually talk. It is a creature created of sewn together body parts and Victor’s own designs. The creature is not human and never can be, but is a result of a human’s desire to create something larger than himself.

Early on in the novel when Victor first goes to college to study, he says this,

“In other studies you go as far as other have gone before you, and there is nothing more to know; but in a scientific pursuit there is continual food for discovery and wonder,” (49).

That may very well be true, but should the boundaries be pushed to the limit as Victor has done? If his eventual dismissal of the creature is any response, than the answer to that question is a resounding “no.”

So yes, Victor pushes the limits of science and what has been done before, then simply dismisses the creature and runs away (and hides like a little girl, distraught at what he has done). Who is really the monster? The creature who did not ask to be born (made) and who is defenseless in a world where his creator has abandoned him? Or the man who pushed science so far he took creation into his own hands and mind and created a being and then left it to its own when the sight of it disgusted him?

It makes all those Hollywood movies seem silly, with the monster shuffling along with outstretched arms moaning and attacking innocent villagers. The villagers should be rallying behind the monster and going after Victor with their pitchforks and torches.

Now, I could be saying this all prematurely, as I haven’t finished the book (but I am close to). The creature could decide to go all Hollywood on me and eat some people or terrorize some virgin maidens, but I still feel the real monster is Victor. Without him and his desire for greatness, there would be no monster wrecking chaos on the poor humans.

I feel a great deal of sympathy towards the creature, for being unable to control its lot in life and the reactions of people to its ugly exterior. I feel the same way towards many other lost things in this world, abandoned by people who are selfish and seeking greatness—the people they stepped on along the way.

I am hoping for a happy, Disney-like ending for the creature, even though I know he won’t get one. A girl can dream, right?