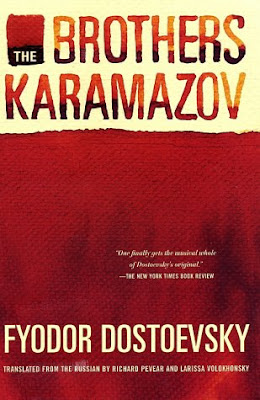 As I said in a previous post, I am reading The Brothers Karamazov by Fyodor Dostoevsky with a group of other bloggers. It is being hosted by Dolce Bellezza, who is also providing links to all of our thoughts. We'll be posting every Thursday in April about each part we read that previous week (4 parts in the book). You can read my review of the first part here.

While I really enjoyed the lively feeling of the first part of the novel, it seems to have taken a turn in the second part. Alyosha is waiting for the death of his Elder and his family life seems to be crumbling.

The second part is set up into 3 more books: Strains, Pro and Contra, and The Russian Monk. Where the second part begins with Alyosha trying to make amends and essentially being the errand boy for his family, the novel takes a different turn into a lot of religious and philosophical talk. It also focuses a lot on the life of the Elder, Zosima.

I had a hard time concentrating once it got to that point. As a general rule, I avoid anything that seems to be overly philosophical because I personally cannot stand reading that when I am in the middle of the story, so it was hard to concentrate and keep going. I am an action kind of a girl and I found that the novel seemed to slow down once it hit that mid-point.

However, I am still loving the novel as a whole and I am curious to see what happens next (and I don't honestly know. I don't know the story at all).

It opens with Alyosha running the errands he promised his family the day before. His father is still home nursing his bruised and battered head (fault of Dmitri). Ivan is trying to play up to Katerina, and Dmitri seems to be missing (temporarily). We learn in the beginning that Zosima is on his death-bed and that Dmitri seems to have embarrassed and hurt a man in town sometime before the novel begins. Alyosha finds this out first hand as he is hit with rocks from the man's son.

I just have to say that the part with the man and his son really touched me when I read it. It struck me more than anything else I have read so far in the novel for its honesty and beauty. The son's pride and honor for his father are inspiring, and not something I have ever seen in my life.

Anyway, I really wanted to focus on a few parts I found interesting. The beginning of this second part opened with Zosima lying sick in bed. I really do love Zosima's character. He is well-developed and I enjoy the scenes with him in it. At the very beginning of part 2, Zosima is on his death-bed and seems to be rambling to the people gathered around him. I enjoyed this passage,

"Let each of you keep close company with his heart, let each of you confess to himself untiringly. Do not be afraid of your sin, even when you perceieve it, provided you are repentant, but do not place conditions on God. Again I say, do not be proud. Do not be proud before the lowly, do not be proud before the great either. And do not hate those who reject you, disgrace you, revile you, and slander you. Do not hate atheists, teachers of evil, materialists, not even those among them who are wicked, nor those who are good, for many of them are good, especially in our time," (164).

I love that passage. It speaks true in all aspects of life and I love that it preaches in a way that we can all understand.

It heavily contrasts with Ivan (Alyosha's brother) and the conversation they have later on. Here is what Ivan has to say,

“I must make an admission,” Ivan began. “I never could understand how it’s possible to love one’s neighbors. In my opinion, it is precisely one’s neighbors that one cannot possible love," (236)

"It’s still possible to love one’s neighbor abstractly, and even occasionally from a distance, but hardly ever up close,” (237).

These two statements are a direct contrast to what Zosima was saying at the beginning. Ivan seems to be that gloomy sort of fellow who is there solely to fulfill that role of contrast, but I like him anyway.

Anyway, the second part leaves us with no knowledge of where Dmitri is. All of the women seem to be losing their minds, or at least prone to crying and being silly. Ivan is gone on a trip for his father. Alyosha is still serving the role of trying to fix the mess, given his position. Their father, Fyodor, is worried that if Grushenka does become his lover something will happen to him. The servant, Smerdyakov, is worried to leave Fyodor alone, and suspense is building. I have a feeling I know what will happen next, but I'll wait until I get to that next glorious part!
Posted by Allie at 10:29 AM