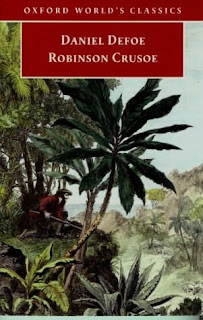 Going into my reading of Robinson Crusoe by Daniel Defoe, I wasn't sure what to think. When I was a kid, my mom had bought us a big collection of illustrated classics for kids. There were a few of them that I really loved (Little Women and Black Beauty) especially, but I stayed away from what I determined to the be the "boy" books. Robinson Crusoe was one of those books.

And I have always seen Defoe's work in that same manner. I was never interested in it and I always thought it would be something entirely different than what it is.

So when I finished the book I was surprised to find out that not only did I like the book, I kind of loved it. It surprised me in many ways. I didn't find it slow or boring, or "boyish" at all. I loved Robinson and his ability to make the best out of a horrible situation. Alone on an island, he didn't wallow or constantly wait for rescue, he survived. He caught wild goats and tamed them so he would be able to have milk and cheese. He rescued the supplies he needed from the ship and stored things he thought he might need in the future. He plotted land and planted his grain in attempts to have a harvest...and he didn't eat his first harvest, but replanted it so he would have a surplus in case of bad weather.

Heck, the man even figured out how make a kind of bread over his fire.

He truly was remarkable. I would have cowered on the beach and probably been attacked by the goats if I was there alone.

The best part of this book is Crusoe's narrative, and his need to record everything that happened on his island over the 24 years he was alone there. His every success and failure is written down so that when he is finally rescued (and he always assumes he will be), he can remember every moment. His undying hope and courage were inspiring and I was sucked in to every moment of this novel.

Looking back on it now, I should have realized sooner that I would love it. One of my favorite books as a young teenager was The Island of the Blue Dolphins by Scott O'Dell. That too is a narrative of how one person survived on an island for years before being rescued. That book fascinated me as a young teen and I was always inspired by Karina and her courage to live alone.

Crusoe obviously has his moments where he feels hopeless. One of my favorite sections of the novel is early on, when he creates a list of the "good" and "evil" of being on the island;

"Evil:
I am cast upon a horrible desolate island, void of all hope of recovery.

I am singled out and separated, as it were, from all the world to be miserable.

I am divided from mankind, a solitaire, one banished from human society.

I have not clothes to cover me.

I am without any defense or means to resist any violence of man or beast.

I have no soul to speak to or relieve me.

Good:
But I am alive, and not drowned, as all my ship's company was.

But I am singled out, too, from all the ship's crew to be spared from death; and He that miraculously saved me from death can deliver me from this condition.

But I am not starved and perishing on a barren place, affording no sustenence.

But I am in a hot climate, where if I had clothes, I could hardly wear them.

But I am cast on an island, where I see no wild beasts to hurt me, as I saw on the coast of Africa. And what if I had been shipwrecked there?

But God wonderfully sent the ship in near enough to the shore that I have gotten out so many necessary things as will either supply my wants, or enable me to supply myself even as long as I live," (58).

I love his ability to acknowledge the bad things, but to take them in stride and understand that he can turn them into good.

The entire novel I was struck by how Crusoe sees the good in everything he does and continuously hopes to be saved. Eventually, he seems to accept his fate and continues to live, still hoping for a miracle.

By the end, I was in awe of Crusoe's ability to maintain positivity in a situation where so many would have given up and failed. He lived and succeeded in ways that are truly remarkable. And I loved every moment of it. No wonder the world of Defoe loved this novel, and cherished the action and adventure of it. It allowed them to escape to another place and live with Crusoe as he struggled against the island.

If you have stayed away from this like I did, then I definitely encourage you to go pick it up. You might be surprised, as I was, by how much you love it!
Posted by Allie at 11:03 AM