When I went on vacation two weeks ago, I brought with me some "fun" books that I had been harboring since...well, not that long ago. As books have been released over the past year, I have snatched up a few titles that I knew I needed to add to my collection. My original intentions were to read these when I finish my project, but I needed a break. So I stopped reading classics for about a week and a half and treated myself to a few of the things I had been stashing away.

I brought five books with me on vacation and they were from two different series that I have been following for a few years. Both had a book recently released, so it was a great excuse to dive in and read to my heart's content.

This first post is over two books in one of my all-time favorite YA series: Ranger's Apprentice by John Flanagan. I even wrote a Thursday Treat post over this series back in January. 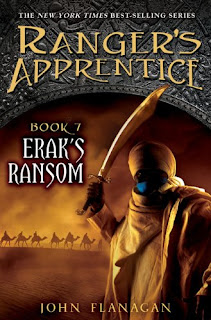 The first book I read, or Book 7 in the series is called Erak's Ransom. It was released a few months ago and since I own the other 6 books in hardcover, I purchased it a week or so after it came out (my books have to match, but that's a whole other discussion). It had been sitting on my desk since I bought it, and collecting a fine layer of dust while it taunted me.

When I began reading this up north, I literally began to fly through it. Everything I read in the eleven months prior to this has been a "classic" so I was surprised at how fast I was flipping pages and getting into the story.

The story itself lived up to my expectations. The characters were still familiar and developed. The plot-line was excellent and allowed the reader to learn more about the world within the series. This volume, in particular, had a lot of action that reminded me of the first 4 in the series (books 5 and 6 seemed to slow down a bit). This made me really happy, as that is part of the reason I love the series. It was action-packed and fun.

My one complaint is that the writing seemed off. It seemed a little wary in some parts, and a little contrived. Perhaps I have been spoiled by all of the great writers I have been reading lately, but Flanagan seemed dry in certain parts. However, the overall experience was enjoyable and I finished all 373 pages in about 3 hours. It was a great afternoon read at the end of the dock.

Book number 8, called The Kings of Clonmel was released earlier 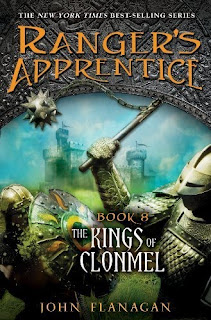 this month. I picked up a copy right before my birthday, knowing I would read it right after book 7. I started this right after finishing Erak's Ransom, and again, I was swept right into the story.

In some respects, I found this book far more mature than the previous volume. The focus was more political and offered a lot to think about. But, that being said, I didn't enjoy the story as much. When I read a book like this, I want to have fun and be swept away. And I wasn't in quite the same way. I thought the plot sounded too much like a prior book, and I was disappointed in the "Twists" Flanagan threw in.

Where Erak's Ransom was fast-paced and action filled, this one plodded along and seemed almost boring in certain parts. And for a series I usually rave about, I am coming away with little positive to say. I generally recommended these to my struggling male readers when I was teaching, but if I was a student and got to this book, I think I'd be a little peeved.

Again, the writing did not catch me in quite the same way as it used to, but I fared better writing wise with this volume than the previous. I do honestly think that my perceptions of good and great writing have changed since starting my project.

With all of this being said, I did enjoy the first two of my five book "fun reads." It was nice to visit with some old friends, and to realize that my reading tastes have slightly altered. I think I am going to be a much bigger critic of what I read than I ever was before, and I owe that to the classics and authors I have been reading.

I just want to say real quick that while it seems like these might be a little negative, I really did enjoy them both. I think I would have enjoyed them more reading the series all together, or if I wasn't shifting from some dense reading (An American Tragedy) to these in a matter of hours. It was hard to readjust.

Email ThisBlogThis!Share to TwitterShare to FacebookShare to Pinterest
Labels: Erak's Ransom, John Flanagan, The Kings of Clonmel, YA