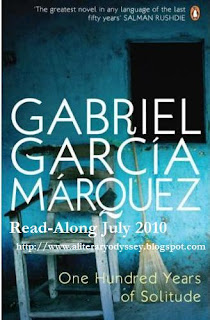 I am so glad that you all voted for this to be the next read-along. And while it wasn't as popular as the Cranford read-along, I am glad that I took the time this month to get acquainted with what I am now going to deem one of my favorite books ever.

I am not sure how to go about explain Marquez's masterpiece to those of you who haven't read it. When I attempted to explain what it was about to a girl at work, she thought I was crazy for saying that I liked it. But I can't help it. The book is marvelous and I really just want to go back and read it all over again.

For me, it was the writing style that made this novel what it is. Marquez's way of weaving magical bits of wonder into everyday life made the novel something completely different than anything else I have ever read.

While the novel is certainly about the town of Macondo, it is also about a family that thrives and suffers with the town. As the years pass, the reader gets to see the Buendia family in glory, shame, success, failure, and ruin. They live and breathe passionately and their tale is so intertwined with that of Macondo, I don't see how Marquez could have written it any other way.

I really loved certain characters. Ursula, the matriarch and wise woman of the family is always lingering in the background. She continually tries to get her family on the right path, and works hard to try to be a success. Her life was beautiful and the final sentences of that life were truly touching.

I also loved Rebeca, the girl who arrives with her parents bones in a bag and eats the earth out of fear and uncertainty. She marries her cousin and moves out, but becomes that image of beauty and insanity. The scenes of her late in life in her house all alone broke my heart.

I also was enthralled with Pilar Ternera, the woman who seduced two of the Buendias and cast their fates in her cards.

The alter Buendias did not hold the same level of passion for me. By the end, Macondo and the Buendias were faltering and dying. But the last pages of the novel were so beautifully and perfectly written I have to share a part:

"At night, holding each other in bed, they were not frightened by 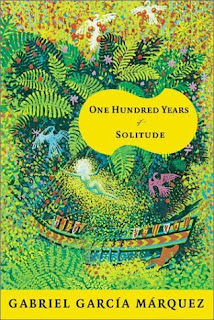 the sublunary explosions of the ants or the noise of the moths or the constant and clean whistle of the growth of weeds in the neighboring rooms. Many times they were awakened by the traffic of the dead. They could hear Ursula fighting against the laws of creation to maintain the line, and Jose Arcadio Buendia searching for the mythical truth of the great inventions, and Fernanda praying, and Colonel Aureliano Buendia stupefying himself with the deception of war and the little gold fishes, and Aureliano Segunda dying of solitude in the turmoil of his debauches, and then they learned that dominant obsessions can prevail against death and they were happy again with the certainty that they would go on loving each other in their shape as apparitions long after other species of future animals would steal from the insects the paradise of misery that the insects were finally stealing from man," (442).

It is a glorious novel and one that I cannot find the words to explain. I think this is a novel you have to read for yourself.

"...and that everything written on them was unrepeatable since time immemorial and forever more, because races condemned to one hundred years of solitude did not have a second opportunity on earth," (448).

If anyone else finished it and has a post written, please leave a link here.