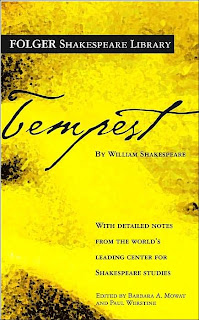 I think William Shakespeare is one of those writers people are most intimidated by. First, he's a poet and a playwright-two things that a majority of modern readers have no exposure to. When we expose ourselves to a play we are usually in the audience, not reading the script. Second, a lot of language in Shakespeare's plays consists of words that were made up, and words we just don't use anymore. The meaning and interpretations of these words are complicated and complex. We certainly don't speak that way now, and to be frank, many people back in Shakespeare's time didn't speak that way either.

So, there seems to be this huge stigma against William Shakespeare and his plays. I think they are often seen as very elitist and intelligent. Personally, I find them slightly challenging...and fun. Here's something you might not know...Shakespeare is a very funny man, and his comedies/romances really display that sense of humor.

I'm not saying you won't have to struggle through Shakespeare. I still get intimidated going into his work. In fact, "The Tempest" is the first play by Shakespeare that I am tackling solo. The other Shakespearean plays I have read so far have all been re-reads of those I read in high school and college. But, surprisingly, I am faring rather well for being so scared.

I will say that it is nearly impossible to read straight Shakespeare. I have one of those big, bulky hardcover collections of his complete works, and I cannot read from it and understand it (maybe one day I will). I have been alternating my reading of his work from two different editions: the Folger's line of Shakespeare, as well as Barnes and Noble's versions. Both offer the direct Shakespearean text on one side, with translations and side notes on the other. It makes reading MUCH easier. I also really like No Fear Shakespeare. It is great for beginners as it gives a direct modern-day translation of the page for easier comprehension.

Anyway, moving on to "The Tempest" I have to say that this is a far more interesting play than I was anticipating. I haven't read it before, or seen it performed, so I am learning the story as I go. Prospero and his daughter Miranda were deserted on an island after Prospero was kicked out as the Duke of Milan. They were left with Prospero's books, which hold all of his knowledge (he can use magic).

One night/day a ship is wrecked near the island and we discover that Alonso, the King of Naples, is on board. Alonso was responsible for Prospero's exile, and seemingly, Prospero brought the tempest that shipwrecked the ship. It seems as if Prospero is going to get his revenge.

In the first two acts we meet some of the other men on board with Alonso, as well as the other inhabitants of the island. There is Caliban, who is a slave to Prospero and Miranda. We also meet Ariel and some of the other spirits. Prospero saved Ariel from his fate being stuck in a tree a few years earlier and has yet to set him free.

Ariel intrigues me. I perhaps owe this to a young adult novel I read last year, Eyes Like Stars by Lisa Mantchev, that displayed Ariel and his trickery. At the time, never having read "The Tempest" I didn't know Ariel's backstory. I like that I am learning more about a character I know from another novel.

I am also finding this play much easier to read than, perhaps, "Macbeth." It was one of Shakespeare's last plays, and perhaps he just got better with age. In any case, I love the writing and wit. And I am certainly looking forward to how Prospero gets his revenge...and what will become of Ariel.

I leave you now with some of my favorite lines from the first two Acts:

Miranda:
"'Tis far off
And rather like a dream than an assurance
That my remembrance warrants," (I.ii.44-46).

Prospero (the book nerd in me loved this):
"So, of his gentleness,
Knowing I loved my books, he furnished me
From mine own library with volumes that
I prize above my dukedom," (I.ii. 165-168).

And Ariel's introduction:
"All hail, great master! Grave sir, hail! I come
To answer they best pleasure, be't to fly,
To swim, to dive into the fire, to ride
On the curled clouds. To thy strong bidding, task
Ariel and all his quality," (I.ii. 189-193).

If you participated and completed a post, please comment and leave a link so I can add your name below!