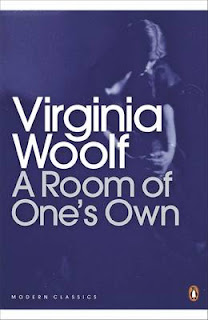 "It is strange how a scrap of poetry works in the mind and makes the legs move in time to it along the road."

For someone who loves Woolf, I am surprised it took me so long to read this slim little volume. I think I always brushed it off as being unimportant compared to her novels. I mean, why read essays when you can read her lyrical flowing writing in Mrs. Dalloway or The Waves? After Jillian raved about this one, I knew I needed to get to it sooner rather than later, and I am glad I reached for it one night.

I feel I can tell you all now that this is now my favorite Woolf, knocking The Waves down a notch. The simple fact is that this "simple essay" has a lot more impact and punch than you would expect.

As a woman who is a read and a writer, Woolf was speaking to me throughout her ramblings and examples. I accepted and understood what she had to say about the plight of women in a writing profession. For centuries, a woman's main role was that of wife and mother. We all know that women have historically stayed at home to take care of children rather than make a living. Woolf merely expands on this idea in new and interesting ways. She invents a sister for Shakespeare who also wanted to write. Rather than being allowed to have that opportunity, as a woman she was forced instead into a more traditional role.

I love that Woolf creates this scenario and continues to harp that women, in order to write, need money and a room of their own to write and create. I read a few passages out loud to Matt, and he chuckled at a few. He said, "don't we all need money to create?"

Of course we all do, but Woolf's point is that if a woman really wanted to strike out on a career that is drastic and different from what society expects, she CAN create with money to get her by. That might not even apply to writing in today's world.

I also love her comparisons between male and female writers. Of course men and women write about different things. I am having a hard time thinking of a female write who has written an epic war novel, while I can think of MANY male writers who have. We cherish and love different things. But because women have been held back from writing, we see far more male writers in earlier centuries than female. What would our written history be like if females had been writing more? If they had been encouraged to write? I think we would view things differently!

But more than any of this insight, I am walking away feeling inspired by a woman who lived my dream. I dabble in writing, and while I continue to write on an almost daily basis, I still try to find purpose in what I set down. Now I feel the push and the urge to capture the things around me I most care about in a way that years from now, someone else may find that same kind of inspiration. Perhaps that is a grand sort of goal, but it doesn't matter. I'm going to reach for it anyway.

"So long as you write what you wish to write, that is all that matters; and whether it matters for ages or only for hours, nobody can say."

If you haven't read this one yet, you should. It was different than her fiction (obviously), but it really does capture the same genius she expresses there. If you have read this one, what did you think?

"Lock up your libraries if you like, but there is no gate, no lock, no bolt that you can set upon the freedom of my mind."
Posted by Allie at 8:00 AM

Email ThisBlogThis!Share to TwitterShare to FacebookShare to Pinterest
Labels: A Room of One's Own, Favorite Passages, Finished, Virginia Woolf