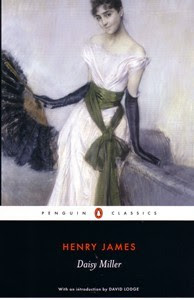 When I was a junior in college, I took my favorite English class. It was with this professor who was incredibly passionate about every piece of literature he taught, and I really began to appreciate literature because of him. One of the many things we read in his class was Daisy Miller by Henry James.

When I saw Jillian was reading this, I knew I had to move it up in my pile. Because while I remember loving that class, this is the one book I was having a hard time finding a connection to. I also really loved the other James novel I’ve read in this process (Washington Square) and wanted another go around.

I think I chose a good one.

Daisy Miller is the story of a young American girl abroad in Europe. The reader meets her through the eyes of Winterbourne. Winterbourne recalls when he first met her, and their subsequent meetings. While they only meet for a small amount of time, Daisy has a huge impact on Winterbourne. He romanticizes her and continues to stand up for her when she makes quite a few unwise decisions.

But the story is not about their relationship. On the surface it is, but underneath it focuses on the complexity of how others view ourselves and our actions. To the outsider in the story, Daisy appears to be a frivolous flirt, throwing herself into awkward situations with men, and causing quite a stir. The people around her (mainly Europeans) are shocked and scandalized by her behavior. But for Winterbourne, who also interacts with her in "scandalous" ways, she is simple a naive but friendly girl. Daisy craves human attention and just seems to form friendships. She cares little for what others think of her.

James is also discussing the relations between Americans and Europeans. There is a clear line between the stuffy Europeans around Daisy and the way she and her family acts. Her mother has no control over her actions and doesn't really seem to mind. But Daisy is acting "American," which is certainly something we are still labeled with.

I have never traveled abroad, so I have not felt that kind of stigma and judgment for being an American. But I know it is there. I struggled teaching my sophomores this past year in history just why so many countries don't like us and our policies. It was hard for them to understand. We are privileged and wealthy in comparison to many countries around the world, and yes, we do act a certain way. I know that I am conscious of this in as many ways as I can be. At the park, my status as an authority figure (and female in charge) is often challenged by patrons of different cultures and ethnic groups. I have to take it in stride and acknowledge that the way I see things is different than how they see things.

I see Daisy Miller as an early version of this. Daisy is a spoiled American girl who is used to getting her way back home, and abroad doesn't see the need to act any different. Yes, she acts entitled, but was she ever taught another way? It is interesting to see this play out, and her general disregard for the feelings around her and her actions.

But what I really loved was the ending. it speaks so clearly to the reader about what to value and why. I don't want to say more than that and ruin it for you. And this is such a short little book, you really should go read it. :)

It was good to reread something I had only fuzzy memories of, and I am determined to get to more James sooner rather than later. There is something very honest and open about his writing, which I also admired in Washington Square. I love this type of society and status novel and the exploration of what it means to be "up there." Perhaps that is why I enjoy Wharton so much? In any case, it is always great to rediscover something I have read before, in a different time and place. It is amazing how much more I pull from it a second time.

How do you feel about the current stigma against Americans? Is there one? Are we deserving?