By the time this post goes up, I should at Detroit Metro Airport waiting for my flight to Orlando. So really, I am cheating and writing this in the wee hours of Saturday night (yeah yeah, this morning). I'm a little too excited to go to sleep, and I knew I needed to get this post done. :)

I am excited to get out of Michigan for a week and to relax in the boiling Southern heat, but this week is going to be a blast. My parents decided we needed a big family vacation, so while everyone might be coming at a different time, we're all going to be together at some point (my dad is driving down solo, and my SIL will be flying down near the end of the week).

We have grand plans for this week. Tomorrow we will be going to Universal Studios and Harry Potter World. Let me tell you that this makes me SUPER excited! I am going to drink butterbeer and go to Zonko's, and perhaps pick up another wand (my sister got me one last year when she went). I am sure I will be posting photos to Twitter if it works, so keep an eye out!

We also have plans to go to one of the Disney parks, but I'm not sure which one. I'm rooting for Epcot, but we'll see. :) I just want to enjoy my week off.

This last week or two weeks had been a little insane. You remember the Great Toe Debacle from the fall? Well, it came back. About two weeks ago, I noticed that the same toe (my right big toe) was looking a little red and felt sore. And then, almost overnight, it went from looking a little off to looking pretty ew. I finally decided I just needed to go back in, and since the original injury was done at work, the city I work for covered the bill to let me go back in. The doctor ended up doing a second surgery (it was kind of like and ingrown nail...if you know about that. Don't google it. The images will gross you out). In the fall, he did a temporary fix and removed the part that was irritating me. I thought it was all healed (apparently not). This time, he told me that when I dropped the brick on my toe, in addition to creating a small hairline fracture, it also pushed on my nailbed, permanently moving the direction my nail was growing. He ended up going in and removing the small section of nail along the righthand side permanently (there was a lot of cutting, and scary tools, and some blood, oh, and some acid being put in to kill the root. I watched. It was fascinating. And yes, it was all numbed up).

Now I seem to be on the mend, but my poor toe looks like someone beat it up. I'm limping a little and when I walk for too long, it starts to kills. I hope it gets better because I am going to be all over that park tomorrow!

Anyway, I am glad it is taken care of, but I never want to go through that whole ordeal again. The lesson learned? DON'T DROP BRICKS ON YOUR TOES!

On to the reading...

I am meandering my way through a number of things. I am working on Vanity Fair still, as well as Their Eyes Were Watching God. Both are going to be going in my carry on I think. I also have quite a few books downloaded on the new NookColor. I went a little crazy the other night, but I have some lovelies picked out for vacation. Some of the downloaded titles include Scott's Lady of the Lake, Chaucer's The Canterbury Tales, The Time Machine by Wells, Hardy's Jude the Obscure, Letters from an American Farmer by de Crevecoeur, Verne's Twenty Thousand Leagues Under the Sea, and Ibsen's The Doll's House. Told you I went crazy. :) 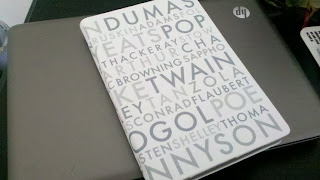 I also bought a pretty cover for the NookColor. I had a hard time deciding which one to get, but when I saw this pretty white one, it spoke to me. I'm sure I'll regret it and it will inevitably get dirty, but who cares. It's pretty now!

I also decided on a name for the NookColor, at least for now. I decided on Homer. :) Fitting? I hope so.

(And if for whatever reason you can't think of why I chose Homer, think about the title of my blog...) 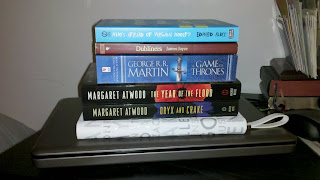 I'm also taking a small stack of paperbacks with me as well. One of them Matt will also be reading (A Game of Thrones), but the others are things I am planning on getting through.

The pile includes my three "fun" reads for vacation time-Margaret Atwood's The Year of the Flood and Oryx and Crake. Also, Martin's A Game of Thrones as mentioned. I'm also taking Dubliners by Joyce and Who's Afraid of Virginia Woolf? by Albee and recommended by Adam.

So yes, I have lots of reading planned. We're going to be spending a lot of time by the pool, so I am going to enjoy it FULLY with some great literature. And now with Homer by my side, I won't run into a problem where I run out of books!

*side story-skip if you'd like**A few years ago, I was flying down to Orlando to meet with my mom and sister for spring break. The rest of my family were unable to come. It was only my second experience flying, and I was freaked out. I was also flying alone and had to make connecting flights all over the place. Leading up to the chaos, I kept joking I was going to get on a plane to Norway on accident and they would never find me! But I was okay and made it.

Anyway, the book connection. I had to fly from Lansing, MI to Detroit, MI for my connecting flight to Orlando (I was at State at the time for class). I missed the connection because of snow and was stranded at Detroit Metro for a few hours before the next plane (it is a really nice airport btw). There was a Borders in the airport, and of course, I wandered in there and ending up buying 3 or 4 new books. I already had a tote bag with me that was pretty full, so I jammed them in there and kind of forgot about them until I was on the plane. Seated and getting nervous, I started shuffling through my tote bag trying to find the book I had already started. It was at the bottom, so I kept pulling out more and more books. This lady next to me looked at me and said, "You know, its only a 3 hour flight. You only need 1 book." I told her, "Just watch, I'll need more than 1."

And what do you know, I finished not only 1, not only 2, but 3 books on that flight....due to the fact we were stuck on the runway for a couple more hours while our plane got de-iced. Rock on bibliophiles. If any airport person tells you that you have excessive reading materials with you, there's a story to support you. :)

Anyway, you will see a couple posts going up throughout the week that have been pre-scheduled. You'll also see updates on Goodreads and twitter I suspect, you know, unless Florida's internet dies. :) So I'll be around...kind of. I hope you all have a great week and I will see you next Sunday!
Posted by Allie at 8:00 AM