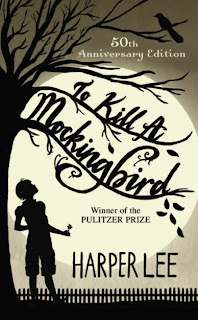 "You just hold your head high and keep those fists down. No matter what anybody says to you, don't you let 'em get your goat. Try fightin' with your head for a change."

Before beginning this, I knew I had read it, but only remembered the basics. After the first few chapters, it all came flooding back! How could I have forgotten?

I am through the first half of the book and thoroughly enjoying this read. Scout and Jem are amazing children characters. I love that Lee chose to tell the tale from Scout's view. I know that I am moving into the racism/court case part of the novel and having Scout as our narrator leading into it was the perfect choice.

I think that knowing the perspective of your story helps its success. This book, and the deep subjects it discusses, would be far different had Jem narrated, or Atticus (their father).

One of the things that I most love about Scout is her true child-like nature. Lee does a great job of giving her a child's voice and we see the world through her eyes. The escapades she pulls with Jem and Dill as they play throughout the summer had me cracking up. Only children would find climbing into an old tire and wheeling down the road fun (it would make me sick nowadays). I love that because she doesn't know any better, they invent a game surrounding the Radleys and the mystery surrounding the family. It is painful to know, as an adult, what the neighbors must be thinking, but that is the fun of being a kid in the summer.

There are two scenes that stick out more than any other. The first is when Jem argues with the older woman down the street about what Atticus is doing. And while what she says is hurtful, Atticus is right in sending Jem down to make things right. I know that had I been in Jem's shoes, I would have been just as mad to sit and read to a cranky old lady in the afternoons. Scout captures that emotion perfectly and since we are seeing Jem's punishment through her eyes, we learn the lesson along with the kids.

The other scene is one that I didn't remember from my first reading. The Finch family goes to visit Atticus' sister. It is there that Scout gets into it with her cousin and hits him for saying something about Atticus. Her hurt feelings in defending her father and the misunderstanding about why she hit him are something that hit home with me. How often did we feel misunderstood as children and as teens? I can remember some moments where I felt like the adults around me didn't give me the chance to speak up. I felt for Scout in that moment.

I think now, as an adult, I need to be more mindful of what the kids in my life are telling me. Like Scout's experience, there could be something more I don't know and need to.

But more than anything, this first half of the book, and Scout's tales of their shenanigans, brought back memories of my own childhood and some of the silly games I used to play with my friends and older brothers (my sister was born when I was 6, so I have memories of playing with her a little later on). And its funny, I was also stuck remembering some of my other favorite book memories (The Little House books came to mind).

Childhood truly is a wonderful thing, and I am glad to be experiencing that of Scout and Jem. I know moving forward that things will get darker for them as the trial begins. But as the saying goes...