Book 117: Winter in the Blood by James Welch. 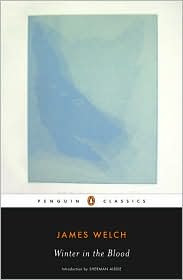 "But now, something else, his distance, made it all right to study his face, to see for the first time the black dots on his temples and the bridge of his nose, the ear lobes which sagged on either side of his head, and the bristles which grew on the edges of his jaw.... But it was his eyes, narrow beneath the loose skin of his lids, deep behind his cheekbones, which made one realize the old man's distance was permanent. It was behind those misty white eyes that gave off no light that he lives, a world as clean as the rustling willows, the bark of a fox or the odor of musk during mating season."

I had the hardest time finding a copy at a bookstore, so I caved and ordered it a couple months ago. Its slim spine was the perfect indicator for a Readathon book, so I picked it up as the last title I read from cover to cover on October 22nd.

And while I marked passages, like the one above, for their beauty and simplicity, I also felt like I was missing the larger purpose and meaning. And then it finally clicked after I thought about it for hours. Winter in the Blood has a lot of similarities to Ceremony by Leslie Marmon Silko, which I read over the summer. Both are set in the wild and untamed west. Both have the mystery and aura of Native American culture. And both are about young men lost and searching for meaning and their identities.

In Ceremony, Silko gives her writing completely over to the depths and emotions that she recognizes as being central to understanding the complexities of her character's life. Welch, on the other hand, seems to hold back. And I know I shouldn't compare the two, but I have to.

What I did like in Winter in the Blood, was the way that Welch told his story. He unveils a piece at a time. Sometimes those pieces make sense. Sometimes they don't. Sometimes it seems as if he is introducing something just to toy with his reader. But by the end, and the ultimate epiphany, his character discovers the connection between new and old, being an American and savoring his culture.

But for me, while I could appreciate the skill with which Welch wrote this story...well, I felt that another writer did it better. And she did it in a way that any story even remotely similar will come second to hers.

Email ThisBlogThis!Share to TwitterShare to FacebookShare to Pinterest
Labels: Finished, James Welch, Winter in the Blood