I figured it was about time to announce the two reads for December Group Reads. I have really enjoyed the new format-less constricting than a readalong-but it is still up in the air at this point whether I will continue to host in the future as a regular feature.

I love hosting, but a very (selfish) small part of me just wants to read whatever I want in the new year AND participate in other events. :) We'll see. I can't resist community aspects of blogging!

Anyway, here are the two books I selected for December's Group Reads: 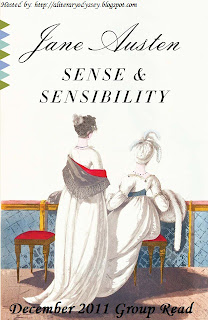 Sense and Sensibility by Jane Austen:

I ended 2010 with an Austen title (Emma), and haven't read any other Austen in 2011. I adore her, so it seems like I should create a yearly tradition of reading her around the holidays. There is nothing like Austen to put a smile on my face.

Sense and Sensibility is the Austen title I know the least. I have only read it once, and it was so long ago that I have a hard time remembering details. And Jillian has been raving about it since she finished it, so I feel like I finally need to pull my copy off the shelf, dust it off, and read it.

"Marianne Dashwood wears her heart on her sleeve, and when she falls in love with the dashing but unsuitable John Willoughby she ignores her sister Elinor's warning that her impulsive behaviour leaves her open to gossip and innuendo. Meanwhile Elinor, always sensitive to social convention, is struggling to conceal her own romantic disappointment, even from those closest to her. Through their parallel experience of love—and its threatened loss—the sisters learn that sense must mix with sensibility if they are to find personal happiness in a society where status and money govern the rules of love." (from Goodreads.com)

I will put a master post up on the 22nd, and you will have until the end of the month to link your post there. Once you have your post up, come back and check in on other participants to see their thoughts and reactions! 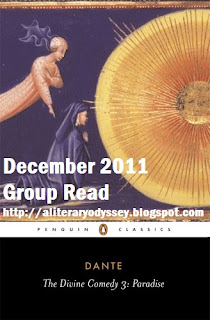 The second Group Read for December is the third and final volume of Dante's The Divine Comedy. I'm not sure who is still hanging in there with me in this three-month read of the three titles, but I hope you'll consider joining in, especially if you've only read Inferno!

In this third and final volume, Dante will travel to Paradise, meet those who have found their way there, and end his travels through dominions not on earth.

I am excited and happy to be reaching the final volume. I am also excited about being able to cross off The Divine Comedy on my list. :) Like the Austen, a master post will go up on the 22nd. You'll have until the end of the month to link your thoughts there!


Thank you all for participating in my various readalongs and group reads this year! I had a blast, and I hope you did too!