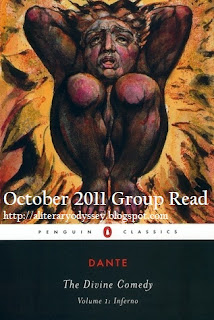 Wow. What a work.
I'm not sure what I was expecting when I began reading Dante's Inferno. Maybe I thought I would get a lot of religious doctrine shoved at me. Maybe I thought that it would be a pleasant description of the place I really don't want to end up in...or maybe I expected something completely different.
I was surprised by everything as I read this. I was surprised that the Cantos were so easy to read and understand (although, every time I read an "old" classic, I am always surprised at how much more readable they are than say....Dickens). I was surprised by the level of description and mood. And I was surprised by just how gruesome Dante made hell seem. And really, I don't want to go there. Visiting it with Dante was more than enough
Inferno is essentially about Dante (the character, not the writer) and his trip through hell. The rest of The Divine Comedy (which I am reading in November and December) will take us through purgatory and paradise. But this one seems to more widely read than the other two...perhaps because it is so disturbing? Yeah, I'll go with that.
Dante is visiting hell with a guide, the poet Virgil, and the two descend the levels of hell to witness not only the people who are there, but also the level of punishment for each sin. I was absolutely fascinated by the descriptions of the rings of hell, the crimes, and what the punishments entailed. Here is a great image to illustrate what I am going to talk about: 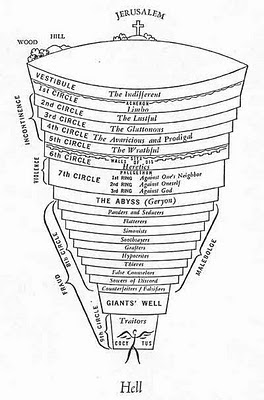 Dante, the character not the writer, explains to us as he descends the levels of hell and what it means to be closer to the bottom (or the smaller rings-however you want to picture it). Those souls near the top and wider rings are sinners who committed lesser sins. Those in limbo are those who never found God in their earthly lives. As you move down, or further into the rings, you find sinners with worse crimes and punishments.

What was most interesting was the perspective on where Dante placed certain sins on terms of this scale. Those near the very center, closest to Satan, were those sinners who seemed to really go with their free will. As I understand it, Dante explains that God gave humanity free will. To violate that will and violate the trust God placed in you as a human being means that you find yourself in a far worse predicament than if you committed a crime of passion (like those in the lust circle, close to the top (outside). I could be interpreting that completely wrong, but that is what I saw.

Anyway, I was completely absorbed in every piece of the journey to the center, and to Satan encased in ice. I loved that Dante met famous people from history-like Helen of Troy, Achilles, and even Popes. It makes you think where these people did end up and why. It makes you question your decisions, and made me wonder who I'll meet in purgatory and paradise. :)

One thing I should mention to those of you who haven't read this is to read the notes. In my edition, translated by Mark Musa, there are extensive notes after each of the cantos. These were amazing. Because while Dante meets people you recognize, there are also a lot of smaller references that will pass you by. Some of those include some of Dante's political enemies and figures I have never heard of, so yes, read the notes.

Now that I am finished walking through hell with Dante and Virgil, I am heading to Purgatory. I hope that you'll decide to join in, even if you didn't join for this group read! (we'll be reading Paradiso in December as well).

*I also want to apologize for posting this...well, almost 2 and a half weeks late. Life got the best of me and this has been sitting in my drafts for weeks*