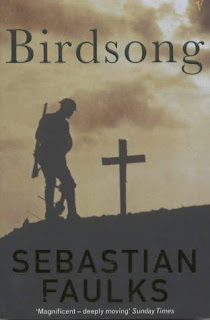 This has been an elusive title for me. When I originally made my list back in the August of 2009, this book was removed and added back in a couple of times. I was concerned that it was a "modern classic," but because it had such wonderful reviews and acclaim, I left it on.

And then I couldn't find it. Every time I went to a bookstore, there were certain books I always looked for, and this was one of them. It was never there and when I asked about it, no one had heard of it.

But, in the midst of all the closing Borders stores over the summer, I found a lone copy mis-shelved. I bought it and gave it a home (and of course, now I see it everywhere I go).

The question is...was it worth the wait?

The subtitle of the book is "A Novel of Love and War," and while I am certainly looking forward to the war aspects, the romance and love Faulks builds in the opening section warmed my heart.

The novel opens by introducing us to Stephen Wraysford, an Englishman who is in France on business in the year 1910. While observing the production methods in a mill, Stephen finds a home with the Azaires, a well-to-do family. It is here that Stephen falls for the beautiful Isabelle Azaire, wife of the man Stephen is staying with.

Faulks does a masterful job if building their romance slowly. It bubbles beneath Stephen's consciousness for a bit before it hits him. While he may be young and foreign, Isabelle cannot help but to be attracted the strength of Stephen's passion. They begin a love affair full of passion and strength. They doubt each other and the strength of their emotions, but the scenes with just the two of them alone are simply beautiful.

"'And do you?' he said. 'Do you feel guilty?'
Isabelle shook her head. 'I think perhaps I should feel guilty. But I don't.'
'And do you worry about that? Do you worry that you have lost something, lost the power to feel ashamed, lost touch with the values or the upbringing that you would have expected to make you feel a sense of guilt?'
Isabelle said, 'No. I feel that what I have done, that what we are doing, is right in some way...'
...
There was the sounds of doves in the garden. He felt his heart beat against her shoulder. The smell of roses came faintly from her scented neck. He settled his hand in the curve of her ribs. His nerves were stilled in the sensuous repletion of the moment that precluded thought. He closed his eyes. He slept, at peace" (73-74).


What I also love about this opening, is that I know that pain and struggle are coming. After all, this is a novel of love AND war, so I know that Stephen will find himself in the trenches, battling for his life. And will it be Isabelle who pulls him through?

Because really, that is the question Faulks leaves his reader with at the end of Part 1. In the last few snippets of chapters, Stephen and Isabelle out themselves to her family. In the dark of night, they leave the house in disgrace. They find themselves in a new place, living as husband and wife. But when Isabelle learns she is pregnant, she leaves him behind.

Stephen is left with nothing but the hope she might return. But since the next section starts in 1916 on the front lines in France, who knows what has happened between.