The Cone-Gatherers by Robin Jenkins. 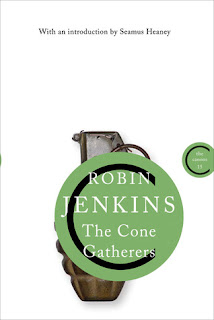 "She could not pray, but she could weep; and as she wept pity, and purified hope, and joy, welled up in her heart."

Originally published in 1955, The Cone-Gatherers by Robin Jenkins is being republished by Canongate Classics in their new series of "Canon" titles. I was offered a copy of the book in exchange for an honest review, and I am so happy I said yes.

On its surface, the book wasn't something that really jumped out at me. But once it arrived on my doorstep, I was intrigued. Maybe it was the minimalist cover, but I sat down, flipped it open, and began reading. And immediately I was transported into a story that I cared about.

I should back up a second and tell you a little background. The novel is essentially about a small community of people on an estate in Scotland during WWII. The landowners have a large amount of trees on the property that are going to be cut down for the war effort. Two brothers are hired on as cone-gathers-basically to gather seed and cones from the trees so the forest can be replanted in the future.

The brothers, Neil and Calum, are incredibly close. Calum is a bit deformed and slow, so Neil cares for him and protects him. In many ways, their relationship was very close to that of George and Lennie in Steinbeck's Of Mice and Men (in fact, the book mentions this relationship on the back cover). It is obvious from the first instant the reader meets the brothers that they have struggled to find and keep work. With Calum's deformities, Neil has his hands full in protecting and caring for him. When the reader meets them, we learn that the two brothers are living in the woods in a rundown hut. They spend all of their days up in the trees harvesting for their masters. Most of the other people who are also on the estate either ignore them or look down on them. They are very much the bottom of the barrel.

Another man, Duror, is the gamekeeper on the estate. He also lives in the woods. At the beginning of the novel, we learn that he hates the two brothers. He is bothered by Calum and his deformity. He seethes in anger whenever he sees the two brothers and sets things in motion to drive the two men off the estate and away from his home.

The other two characters that I really need to mention are Lady Runcie-Campbell, the woman of the estate, and her son, Roderick. She is very much of the upper-class and in her few encounters with the two brothers, she acts superior to them and their work. It is obvious from the way she speaks with both of them that she is bothered by their poverty. Her son, on the other hand, is the shining little piece of hope in the entire novel. He feels for the men and doesn't understand why his mother looks down on them for making a living in their own way. She chalks up his feelings to immaturity and a lack of proper education, but it seems obvious that he is the only one with any sense of social justice.

So it is with these characters that the novel unfolds over the course of just a few days. The reader learns the grievances of the two brothers as they seem to be cast aside by the rest of humanity. Roderick attempts to understand what his place is in the upper class as his mother continually instructs him on how to behave by treating those around her as if they are less than her. And Duror...he lurks and hides in shadows. The chapters and scenes with him make your skin crawl as he plots and watches the brothers working.

The whole novel is smooth and haunting from the very beginning. Jenkins drew me in from the first page with lush descriptions of the forest and trees that the cone-gatherers called home,

"Single stars appeared, glittering in a sky pale and austere. Dusk like a breathing drifted in among the trees and crept over the loch," (2).

The forest was also a character in all of this, providing a sense of gloom in the backdrop of the characters' interactions, since it was also doomed (the threat of being cut down to aid the war effort). But Jenkins also gave this sense of despair in his descriptions of the characters and their actions, from Duror,


"Hesitating there in the hallway, he felt himself breaking apart: doomed and resigned he was in the house' still yearning after hope, he was in that miserable hut," (23)


"By merely enduring, she could have acheived a superiority over any earthly visitor: even a queen in her resigned presence must be humble. Instead, monstrous and feeble, she would fawn and simper and suggest obeisances almost obscene," (134)

to Roderick's own despair over not being able to change things,

"Coached by his grandfather, Roderick knew that the struggle between good and evil never rested: in the world, and in every human being, it went on...Good did not always win," (145)

and to Neil's doubts about his own abilities to continue to protect Calum in an ever-harsher world,

"Wherever that light had shown from, it had not been from heaven. There was no such place," (150).

All of it leads to the final 20 pages and the decisions that change the land and the quiet, peaceful nature of the woods where the story takes place.

In many ways, the story IS similar to Of Mice and Men, so that comparison on the cover is correct. But where I find Steinbeck's novel to be harsh and garish, I found Jenkins' story to be simmering and smooth. While I knew, from the tone and descriptions I shared above, that something would happen, he never pulled me from the beauty of the Scottish woods. He also made me understand Duror in a way that I never could understand Curley. Where Curley was just a gross example of a man...I could see why Duror would be filled with such hate and anger.

I think it is safe to say that I preferred this one over Steinbeck's novel, if only for the beautiful language and the ultimate climax of the novel. This, quite simply, was an amazing read. It drew me in from the very beginning and sank in. The complex balance between good and evil, right and wrong, the old way and social niceties...it was all in perfect balance before the scales tipped at the very end. It gave me much to think about and as I closed the book, I found myself thinking about all the moments when that own balance in my life has been tipped.

This is definitely one I would recommend, especially if you didn't enjoy the harsh nature of Steinbeck's tale (don't get me wrong, I'm a fan of Of Mice and Men, but this was done so much better). I am certainly going to seek out more of Jenkins' work in the future, as well as other titles in this collection of books.
Posted by Allie at 8:02 AM