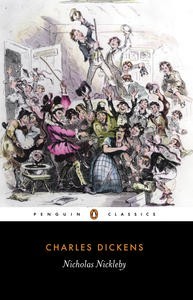 “When I speak of home, I speak of the place where in default of a better--those I love are gathered together; and if that place where a gypsy's tent, or a barn, I should call it by the same good name notwithstanding.”

I started reading this back in February as part of my little ode to Dickens on his 200th birthday. That was a mistake for a few reasons. First, I picked it up after finishing David Copperfield, which blew me away. In fact, David Copperfield remains my favorite book of 2012. It was also another lengthy title in a month where I read two other chunky books-David Copperfield and Roots-both of which were well over 800 pages. I also started the book a week before finding out I had a landed another long-term subbing position.

So you see, Nicholas Nickleby and I got off to a rough start. I managed to get to page 180 or so before setting the book down. And there is sat, languishing away on my nightstand for a couple months before I picked it back up again. It seemed to be a bit of a love/hate relationship. Once I started reading it again, I was reminded of how much I really enjoyed the story. But I also hated it a bit. I always had it lingering in the back of my mind as being something that was unfinished and dragged out.

I finally determined enough was enough and devoted myself to reading the book in the middle of July to finish it once and for all (and the fact that only parts of this post have been written until today also shows you how everything about this book seems to drag out). 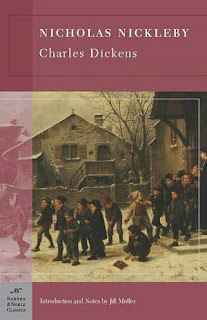 So, on to discussing the actual book, now that I've dragged this all out.

Nicholas Nickleby is quite simply the story of a family down on their luck after the loss of their father/husband. With no one else to turn to, the Nicklebys seek out the help of Ralph Nickleby. Uncle Ralph supposedly comes to the rescue by seeking out employment for Nicholas and his sister. What happens after is a series of life-changing events as the Nicklebys come to terms with finding a stable life on their own.

In one word, I might describe the book as funny. There are many "Dickens Characters" throughout the entire novel. They make the book what it is, and even after I set the book aside for months, I still could picture them in my mind clearly as I finished the rest.

The first big character to come to mind is Wackford Squeers, Nicholas' first employer. Dear Wackford runs a school out in the country. He hires on Nicholas to help teach, but it is clear from the beginning that Squeers is just in education for the money and really doesn't care about the boys he takes in. A good first part of the novel takes place at the school, as Nicholas realizes what kind of abusive environment the boys live in. The Squeers family, while horrid creatures, were actually some of my favorite characters in the novel, just because of how much I hated them!

Another character that comes to mind is Smike. Orphaned when really young, Smike has been a part of Squeers' school for a long time. He isn't all that bright, but he's loyal and loving. When Nicholas flees the school (not a spoiler, as this happens fairly early on), he follows him to serve him. I was struck by how Smike was always there for Nicholas as they continued traveling and finding work to sustain them. Their friendship throughout the novel was purely genuine, and I loved seeing their interactions. 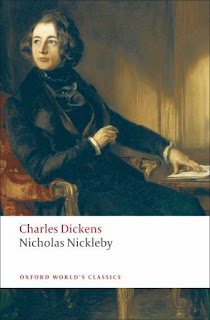 I should also mention Ralph Nickleby in passing, since he was a conniving piece to all of Nicholas' misfortunes in the beginning. You would hope, that in the event of a family member's death, your family would be there to support and love you. Ralph was anything but supportive and loving. He handed off Nicholas to the first person (Squeers) who would take him on, then seemed to brush his hands of the whole matter.  We eventually find out bits and pieces of why Ralph was such a piece of work.

Overall, I really enjoyed the story, but it paled in comparison to David Copperfield. In many ways, the two stories are similar. Both tell of young men, David and Nicholas, who are trying to work their way up in the world and become successful. David's story seemed more honest to me. While he was also surrounded by schemers, he also had people who truly supported him helping him along the way. Nicholas' story, on the other hand, seemed full of characters. And while I love a good Dickens character, they were too much throughout the entire novel. It seemed overdone...and fake in some way. I just preferred the honesty of David's story over the wild nature of Nicholas'.

But that doesn't mean it isn't a good book, because it most certainly is! It had me laughing constantly, and there were many passages that I marked. It was also a fast read (once I settled back into it) and I finished the last half in only a couple of days. It is definitely a great example of Dickens at his funniest, and of course, the social commentary was spot on. I will definitely read it again!

“Happiness is a gift and the trick is not to expect it, but to delight in it when it comes."
Posted by Allie at 12:01 PM