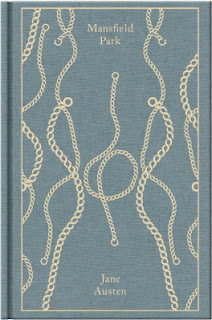 It has been a long time since I have talked about a title from my 250 Project list, AND it has been an even longer time since I've read this title in particular.

I decided to read Mansfield Park for Adam's Austen in August event. And I did read the entire novel in the very beginning of that month. Then, my classes I was teaching changed, so I was in a planning craze, then I started feeling sick, then school started, and before you know it, here I am in January. Whoops.

But I can't let this one just slip through the cracks, so I must say something about Austen's novel, even though it probably won't be all that detailed (or insightful).

I had read Mansfield Park once before-back when Austen was a new obsession-and while I enjoyed it then, it wasn't my favorite. Mansfield Park is definitely a quieter version of Austen, and I much preferred her rip-roaring heroines in Pride and Prejudice and Emma. But, I was eager to read this one in August to see if my feelings had change at all.

Imagine my surprise when they didn't! I really thought that coming to this novel with a more mature perspective and outlook would increase my love for it. After all, I do love the quiet strength of Anne Elliot in Persuasion. And while I liked Mansfield Park more than what I remembered, I'm going to be honest and say it is still my least favorite Austen. While the clever wordplay and passion is still there, I just wasn't as invested in the story, or as interested. It was good, but I didn't think Austen was at her best.

That makes me wonder how many other authors that I love have books that will seem like a disappointment to me (and again, I want to stress that I liked the novel-it just paled in comparison to the other titles in Austen's name). By reading a lot of the "big" titles by these classic authors, will I find myself disappointed when I read their minor works? Will there be multiple books by them that I won't like? Will I get sick of reading them? Those questions taunt me a little, and I suppose I won't know until I read more by the authors I have merely been exposed to.

In any case, Mansfield Park is a book that I will return to again. Perhaps it still isn't the right time for me to click with the story, or see the depth that many other bloggers and readers do. So yes, I will read it again and again. :)
Posted by Allie at 7:30 AM