Book 150: Cat on a Hot Tin Roof by Tennessee Williams. 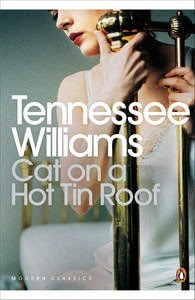 I've only had one other experience with Williams, and it was pretty positive. And when I decided to pull this title down for a read during the readathon a couple weeks, I was expected a fast read and nothing more.

I think I should have learned by now that all the plays on my list are there for a reason. I can't so easily dismiss them.

Beginning this one, I was struck by the similarities to another play on my list, The Little Foxes by Lillian Hellman. It took me a little while to place my reactions to Hellman's play aside in order to concentrate on this one, and once I did, I realized that a lot of the similarities were only on the surface (both focus on a dying cotton plantation owner and matter of inheritance). And I believe the years between the "publications" of each play show a remarkable different. Hellman's play, first written/performed in 1939, is definitely fiery and full of passion. There is a lot of scheming and plotting on part of the main female character to insure that she will be left wealthy. She pushes her family and insists on having everything she thinks she deserves.

And while Williams' play also has a strong female lead in Maggie, there seems to be a lot more at stake for the family members. There is a lot more depth to the backstory, and it appears that Williams play is more about the individuals than the plot. Each of the characters has a motive and a desire that is brought to the surface of the play, then they disappear a bit into the background. As I was reading, I kept catching glimpses of each struggle, all kind of bubbling there under the surface.

Essentially, the play is about Big Daddy and his fortune. He recently went to the doctor, and while most of the family knows the truth-that he is dying of cancer-he doesn't. So, his two sons and their wives are trying to win favor to get his inheritance. And as they push and prod him, all kinds of issues come out-alcoholism, infidelity, jealousy, repression, desire, and death. All of these issues influence the characters in different ways until it all comes out-the truth about Big Daddy's impending death, the truth behind a friend's suicide, secret desires, and a whopping big lie.

By the end, I was reading and flipping pages as fast as I could to discover what happened. It was fast-paced, tense, and incredibly unsettling, but I really did love it.

However, like all the plays I've read for this project, there is only so much I can interpret from reading the lines of the characters. I wish I could see all the plays on my list, then read them. I think I would pull far more from the performances. But I am glad I have one more by Williams to read-A Streetcar Named Desire-and a slew of other poems. :)

“In all these years, you never believed I loved you. And I did. I did so much. I did love you. I even loved your hate and your hardness.”
Posted by Allie at 7:30 AM