Book 151: My Antonia by Willa Cather. 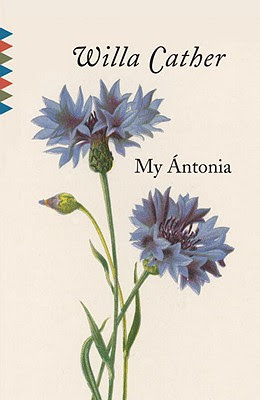 “Now I understood that the same road was to bring us together again. Whatever we had missed, we possessed together the precious, the incommunicable past.”

My Antonia is a book that I have avoided since my first read as an incoming high school freshman. It was one of three books we were required to read before the year started (the other 2 were Ender's Game and The Count of Monte Cristo), and it was a novel that my entire class hated. I've actually written about that experience before, back when I read Cather's O Pioneers! as book 25.

At the time, I think my read of her novel came at the wrong time. First, it followed two books that blew me away with action and plot. And if you've read My Antonia, you know it is a much quieter book.

I also think I fell victim to the pressure of my peers to hate the book. Because I while I remember being frustrated with the novel, I don't think it was until I was in class talking about the book that I hated it.

In all reality, My Antonia is a book I should have loved back then. I have always been fascinated by life on the prairie and the lives of those who went west with the expansion of the United States (as proven by my love for Laura Ingalls Wilder and the fact that my American Girl doll was Kirsten-the pioneer). I suppose I can chalk up my previous experience with Cather to being a stubborn teenager, and to the book finding me in the wrong time and place.

For this read, I was excited to begin. After loving O Pioneers! so dearly, I had high expectations for this, especially because I could barely remember it. I decided to dive in during The Classics Club Readathon, and I wasn't disappointed by the story.

Yes, My Antonia is a quieter story. At its heart, it is a perfect example of picaresque literature. There are small stories that connect together in small ways, but they all come back to the narrator's reflections of Antonia.

“But she still had that something which fires the imagination, could still stop one's breath for a moment by a look or gesture that somehow revealed the meaning in common things. She had only to stand in the orchard, to put her hand on a little crab tree and look up at the apples, to make you feel the goodness of planting and tending and harvesting at last. All the strong things of her heart came out in her body, that had been so tireless in serving generous emotions. It was no wonder that her sons stood tall and straight. She was a rich mine of life, like the founders of early races.”

The writing is absolutely divine. Cather paints a portrait of life on the American prairie and the challenges those individuals face. And while the read certainly gets to know Jim Burden, the narrator, we also get to know the community he grew up in and how Antonia fit into that world.

The beginning of the novel has some of my favorite descriptions. It is early on in the novel that Jim comes west to live with his grandparents, and the enormity of the landscape almost overwhelms him at times.

“There were no clouds, the sun was going down in a limpid, gold-washed sky. Just as the lower edge of the red disk rested on the high fields against the horizon, a great black figure suddenly appeared on the face of the sun. We sprang to our feet, straining our eyes toward it. In a moment we realized what it was. On some upland farm, a plough had been left standing in the field. The sun was sinking just behind it. Magnified across the distance by the horizontal light, it stood out against the sun, was exactly contained within the circle of the disk; the handles, the tongue, the share—black against the molten red. There it was, heroic in size, a picture writing on the sun.”

From Jim's appearance on the prairie, there is also the appearance of Antonia and her family-a strong-willed group of immigrants who struggle to survive amidst the hard conditions. Reading about their struggle brought back a lot of images related to the other "pioneer" novels I have read. And like the others, Cather touches on the violence of the conditions, but also the beauty of a land more devoted to nature than human influence.

“There was nothing but land; not a country at all, but the material out of which countries are made.”

The novel also continues to grow with the characters. Jim and Antonia grow up and change-moving to town and discovering loves of their own. Their growth, as well as the growth of the prairie, are central to the entire novel. While they shape the land around them, it also shapes who they become.

In all, it is a beautiful novel, but quiet. It merely reflects on the life of the pioneers-those brave individuals and families who forged the western half of the United States. It does so eloquently and with a quiet strength.

And, it was most certainly wasted on my 14 year-old self. But, I am glad I took the opportunity to read it again as an adult, and to cherish it.

“The earth was warm under me, and warm as I crumbled it through my fingers...I kept as still as I could. Nothing happened. I did not expect anything to happen. I was something that lay under the sun and felt it, like the pumpkins, and I did not want to be anything more. I was entirely happy. Perhaps we feel like that when we die and become a part of something entire, whether it is sun and air, or goodness and knowledge. At any rate, that is happiness; to be dissolved into something complete and great. When it comes to one, it comes as naturally as sleep.”
Posted by Allie at 8:00 AM