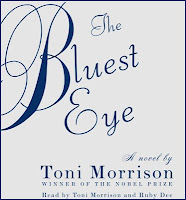 I’m halfway through The Bluest Eye and I love it. It really is a powerful novel and I already have a million things I want to write about, even though I’m not done. I’ll try and save some things for when I do finish.

I seem to be drawn to authors who have the ability to craft the English language beautifully. Even though they use words we all use on a daily basis, they do it in a way to make the words seem extraordinary. I wise I had that ease with words. Sometimes my own sentences fall flat, where theirs can grab you and lift you off the page.

Let me show you what I mean. I might craft a sentence to say the following:

“An old store is on the corner of Broadway and Thirty-fifth street in Lorain, Ohio. Its kind of an obvious store for its ugliness as it seems to leap out at the people who see it. People visiting Lorain stare at its ugliness and wonder why it’s still standing, while residents just ignore it, as they have always done.”

And Toni Morrison seems to describe the scene like so:

“There is an abandoned store on the southeast corner of Broadway and Thirty-fifth street in Lorain, Ohio. It does not recede into the background of leaden sky, nor harmonize with the gray frame houses and black telephone poles around it. Rather, it foists itself on the eye of the passerby in a manner that is both irritating and melancholy. Visitors who drive to this tiny town wonder why it has not been torn down, while pedestrians, who are residents of the neighborhood, simply look away when they pass it,” (33).

Morrison makes that old ugly store seem much more real than I do and she does it in a beautiful way. I love her use of adjectives and the way she paints the picture so you see it. I’m just telling you and not doing a very good job of it.

Here is another example from the next page that I absolutely love;

“Each member of the family in his own cell of consciousness, each making his own patchwork quilt of reality—collecting fragments of experience here, pieces of information there. From the tiny impressions gleaned from one another, they created a sense of belonging and tried to make do with the way they found each other,” (34).

It is just a powerful statement. She speaks to how family members exist on their own until they are called together in such an elegant way.

I wish I could write with such open honesty. When I attempt to write passages to get across similar meanings, my emotion falls flat in my writing. I think I have the habit of telling rather than showing my stories. Perhaps learning more from Morrison can help my own writing.

I have one more passage I want to share:

“These and other inanimate things she saw and experienced. They were real to her. She knew them. They were the codes and touchstones of the world, capable of translation and possession. She owned the crack that made her stumble; she owned the clumps of dandelions whose white heads, last fall, she had blown away; whose yellow heads, this fall, she peered into. And owning them made her part of the world, and the world a part of her,” (47-48).

I just find that so powerful, the idea of making enemies of the things that challenge you, your own. Perhaps I need to do that with Dickens. And a lot of other more serious issues going on in my life. Like my current unemployment. I can own my unemployment. I don’t have to like it, but it is my own and makes me a better and stronger person in the end.

Truly powerful, isn’t it? Making friends of your enemies?

There are many other things I want to talk about—the bluest eye for instance, and the issues of how we view beauty, but I think they can wait a little longer. I’m going to go learn more from Morrison.