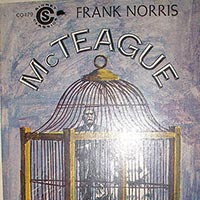 I am not sure where to start in my final thoughts on McTeague by Frank Norris. On one hand, I loved the novel. But on the other, it has left me feeling…rather depressed.

It was unlike any other “classic” I have read and a far cry from the adoration and happiness that plagues Pride and Prejudice and a few of my other favorites. In one word I would describe it as “seedy.” In another word “greedy.” The characters are both and they are what drive Norris’ depiction of social class and environment.

Throughout its entirety, McTeague is a reflection of a time and place in American society where all are hoping for something better in life—a better standing, etc. Marcus tries this by leaving San Francisco to go into ranching. McTeague did this when he left the mines of his youth and took up dentistry. However, underlying all of that is greed. Each and every one of the characters, with perhaps the exception of Old Grannis and Miss Baker, want something from someone else.

McTeague is perfectly happy with what he has in life (no wife, a solid dentist practice) until he meets Trina and wants her. All of a sudden he needs a wife and he gets one, even though his friend Marcus “loved” her first. He wants Trina and gets her.

Trina becomes greedy when she wins $5000 in the lottery. She is greedy in the way that she is protecting her money, to the point where she becomes an old miser (McTeague’s word, not my own). She wants to save so much that it drives McTeague and herself to destitution and eventually a form of madness.

Marcus is also greedy, looking to get a part of that $5000 that he believes he deserves, since he “gave” Trina to McTeague in the first place. Had he not done that, that money would have been his.

This greed on part of all of the characters is what drives this story to madness and eventual tragedy. Even in the final showdown between Marcus and McTeague, greed is what prevents them from reconciling and from moving on in life (I can’t say more or I would give it away).

I also want to point out that the graphic violence in the novel leads to the depressed feeling as well. McTeague is always mentioned as a big brutish man, but when you first meet him, you can’t quite think of him as violent. However, as the novel moves forward and his circumstance change, you can see him become a much darker and scarier man. He begins drinking, which leads towards a more violent temper towards Trina and others. He doesn’t seem disturbed by his own violence, as his violent acts as a result of his greed and need for more. In the end, his violence and greed trap him, as greed traps all of us.

In all, this is a disturbing view of life around the turn of the century. It paints a picture far more depressing and shocking than anything else I have read from this time period. I can certainly see why this little book created some public outrage upon its publication and why it has a legacy all its own.

It is also a shame that Frank Norris died shortly after its publication and has left so little work behind him. In the future I will definitely be reading his other work to see if they are as powerful as McTeague.

I will leave you with this last line from McTeague, which I think sums it up very nicely:

“McTeague remained stupidly looking around him, now at the distant horizon, now at the ground, now at the half-dead canary chittering feebly in its little gilt prison,” (347).