Book 10: My Hatred of Charles Dickens. 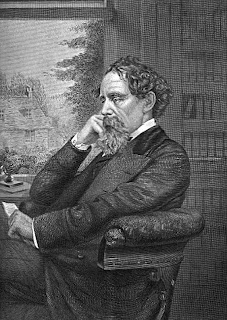 I have a deep and abiding hatred for a Mr. Charles Dickens. My first exposure to him was somewhat positive, with his A Christmas Carol. To be perfectly honest, you are a scrooge if you don’t at least halfway enjoy that tale.

My second exposure was in ninth grade Honors English when we had to choose between reading David Copperfield and Ender’s Game by Orson Scott Card (now my favorite book). After reading the back covers of each book, and weighing them in my hand (a very scientific process), I decided on Card’s book, which eventually led to my love of science fiction. I thought to myself at the time that I made a very narrow escape, as the kids who choose David Copperfield all confided that it was a miserable bore.

Unfortunately for me, later that same year we were all assigned to read Great Expectations. And I hated every minute of it. I believe I read the first 100 or so pages before deciding I would rather gouge my eyes out than read more about Pip. After that, I went to sparknotes.com and managed to squeak through the rest of that unit—sorry mom. I never finished the novel and I thought to myself that I would rather die than read any more Dickens.

Alas, for an English major, it is quite hard to avoid Dickens, but I tried my best to do so. I actually switched sections for one of my required classes because I heard that the professor I had class with LOVED Dickens and FOUR of his novels were on our reading list. Switching ended up being a good decision. There was only one Dickens novel on the list, Hard Times.

In that class, the professor told us we could manage to get away with only reading half the books if the reading was too much. I had never heard that from an English professor before and all of the kids in my class had their mouths open. Then he amended what he was saying and said that if you read half the books, you could squeak by with a passing grade of 1.5.

That class ended up being my favorite English class I ever took at MSU and the professor, Professor Watts, was my favorite. We read A LOT and while some things I didn’t enjoy, I discovered a love for many 19th century authors in his class.

When it came time to read Hard Times I would like to say that I tried. In fact, I think I read 5 pages before making a very hard decision. Hard Times became the ONLY BOOK in my entire college career that a professor assigned that I did not read—again, sorry mom. I couldn’t stand those five pages and my prejudice from my previous experiences with Dickens solidified my decision.

I graduated with and English degree without reading any Charles Dickens. Doesn’t that sounds horrid??

Well, when I decided to embark on this little challenge of mine, I was kind of annoyed to find that so many of Charles Dickens novels were on the A.P. list and on “best of classics” lists. I even thought about ignoring his work and pretending he didn’t exist, merely so I wouldn’t have to read anything written by him. After deciding that I would be cheating if I did so, I relented and put on the novels written by Mr. Dickens that seemed to pop up the most. They ended up being the following:

7 books to challenge me more than any others (well…perhaps the Russians might give Dickens a run for his money). You might notice that I left A Christmas Carol off the list, mostly because I know it too well and I wanted to keep the number on my list to a rounded 250 titles.

Instead of leaving these to the end and sloughing through them, I have decided that since I have read 9 wonderful books, I might as well throw in an awful Charles Dickens experience to get it out of the way. Besides, six is a much better number to have looming over my head than seven.

So, Book 10 is a Dickens wonder (HA!). And to make it even more super-duper fun, I have decided to give my arch-nemesis a go and get it over with. Great Expectations has the honor and privilege of being Book #10 and I will probably hate it just as much this time as I did the last time through.

Let’s just say that I have no great expectations for Book 10 (HA!).