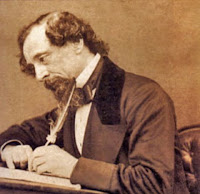 I finally finished Great Expectations last night. I was so happy to be done with it, simply because it seems as if Dickens took over my life for awhile.

So, what did I think of it?

The first 350 pages are all exposition (the setting up of the story). You meet the characters, Pip comes into his wealth, some small problems pop up, and next thing you know, you’re 350 pages in and nothing has really happened. Yes, it is all important. You learn a LOT about the characters so that by time the action does happen, you understand why they do what they do. But still, 350 pages?

The last 100 pages are where the action is. Magwitch reveals himself, Pip realizes what a whiner and idiot he is, and things resolve themselves. Finally all those little details Dickens throws in seem to matter.

Here are my thoughts.

Had the book been half the size, I think it would have been a lot easier to read. Dickens is known for being wordy. Why? Because when he first published his novels he released them in a serial format. A chapter or two a week would be printed in a magazine. Every week the next chapter or two would come out. Obviously people would have to buy all those magazines if they wanted to read the entire story. What makes more money; a 200 page novel or a 500 page novel? Obviously Dickens padded his works to make more money, and you can’t really fault him for that.

However, now reading it in novel form, it is just too much. Too much description, too many details, too many things that just don’t need to be there to make it an effective story.

Besides all that, I did like the story. The premise of it is interesting. Pip is poor and an orphan. He’s adopted by his older sister and her husband, who bring him up in hopes he will be an apprentice to Joe and also be a blacksmith. However, he soon has a few encounters with some mysterious characters (Magwitch and Ms. Havisham) who alter his future. He is told that he has a benefactor, a person who wants him to become a gentleman and he goes off to London to learn more.

Through all of his learning, he becomes rather snobby towards his beginnings and assumes he knows everything. It is only after he learns the truth that he realizes that having expectations does not mean a better or more successful life.

Really, it is a good story. It just could have been shorter. A lot shorter.

In any case, I am glad to be done with it and moving on to something I will hopefully enjoy more.