Book 15: Travels with Charley in Search of America 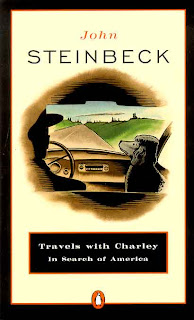 I have never read anything by John Steinbeck.

Before you attack me, know that it was not entirely my fault. In high school I was always in Honors or AP English. During my sophomore year, I ended up in the one class with a teacher who had never taught it before. Her genius idea was to let us vote for the things we wanted to read and discuss that year. While we read some great things that year, The Grapes of Wrath was mysteriously left off our list. I think that my classmates were also scared of its immense volume.

(She never taught Honors English again by the way. I think her methods of teaching were too much for the administration to handle. The entire class was set up as a workshop where we got to decide our own assignments and due dates. We all loved it, but apparently no one else did).

So, I blame my high school for not having to read any Steinbeck in class. And then somehow I earned my English degree without having any Steinbeck on the required reading lists (unlike Dickens, where I just decided NOT to read it). And in all my own prior reading, I just simply never picked up anything by him, even though I probably should of.

I have heard both good and bad things about Steinbeck and I think he might be one of those authors that you either love or you hate. My brother-in-law LOVES Steinbeck and he is the one who asked me to add this title to my list. There are a few other titles by Steinbeck that I left off so I could keep this on (like Tortilla Flat). I am hoping that this was worth it.

Plus, this book has a dog in it and from experience, anything is better with a dog.