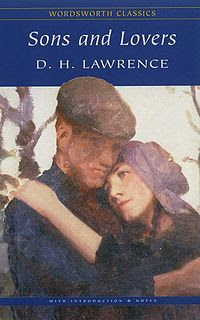 "Sometimes life takes hold of one, carries the body along, accomplishes one's history, and yet is not real, but leaves oneself as it were slurred over.


When I sit down to write these entries, I usually have a lot of thoughts running through my head about what I want to say. And generally speaking, the entry comes out sounding like nothing in my head, but still gets my point across.

Right now, I am at a loss as to what to say. I finished Sons and Lovers and I don't have a thing to say about it. It is not as if I hated it because I didn't. However, I didn't love it and I am not even sure that I like it. I feel kind of "meh" about the whole book.

It is definitely a weird little story about a man who is so connected to his mother that he cannot break free from her to pursue a relationship with another woman. His mother controls him and he is fine with it. Perhaps you could call him a momma's boy? That makes it sound trivial, which it is not, but that seems to be the essence of this novel. Paul Morel is his mother's boy and he believes he must make her happy, to the expense of his own happiness.

In some passages, it seems as thought his mother, Gertrude, is living through him and accomplishing her goals through her second son. Take this passage for example;

"But Paul was going to distinguish himself. She had a great belief in him, the more because he was unaware of his own powers. There was so much to come out of him. Life for her was rich with promise. She was to see herself fulfilled. Not for nothing had been her struggle," (161).

It is hard to take in the passage without seeing how she is living through her son. I saw this a lot growing up with my friends, and even with my students. How their parents wanted to achieve more through them by pushing them to do the things that they didn't want to. And while my parents pushed me, it wasn't because they were living through me, but because they wanted me to be successful.

So perhaps this novel was just hard to relate to and that is why I don't have a solid opinion of it.

Or it could be the writing. It was sometimes slow and tedious and sometimes it held a lot of drama. But I found it to be inconsistent. There were long pieces that were description of something that I found to be unimportant. Then there were pieces that were short, but help more action. It just left me feeling like Lawrence was playing games with me. I didn't appreciate it.

But I did like the story. Of a boy trapped between his mother and his lovers. In doing some research online, I found a site with a bunch of D.H. Lawrence's letters to his editor. I think this one explains the book far better than I could ever hope to;

"It follows this idea: a woman of character and refinement goes into the lower class, and has no satisfaction in her own life. She has had a passion for her husband, so her children are born of passion, and have heaps of vitality. But as her sons grow up she selects them as lovers — first the eldest, then the second. These sons are urged into life by their reciprocal love of their mother — urged on and on. But when they come to manhood, they can't love, because their mother is the strongest power in their lives, and holds them. It's rather like Goethe and his mother and Frau von Stein and Christiana — As soon as the young men come into contact with women, there's a split. William gives his sex to a fribble, and his mother holds his soul. But the split kills him, because he doesn't know where he is. The next son gets a woman who fights for his soul — fights his mother. The son loves his mother — all the sons hate and are jealous of the father. The battle goes on between the mother and the girl, with the son as object. The mother gradually proves stronger, because of the ties of blood. The son decides to leave his soul in his mother's hands, and, like his elder brother go for passion. He gets passion. Then the split begins to tell again. But, almost unconsciously, the mother realizes what is the matter, and begins to die. The son casts off his mistress, attends to his mother dying. He is left in the end naked of everything, with the drift towards death," (Letter to Edward Garnett, November 12, 1912).

You see, when I finished reading this, I felt none of that. I felt frustrated because I didn't relate to the characters and I was upset with the pace of the book. So I am left here, feeling "meh" about the whole experience.

I suppose I knew going into this that I would not fall in love with every book on my list. After all, there are 250 different stories that I am reading, and there are many different authors as well. And while I have seemingly lucked out in the choices so far, I know that there will probably be books coming that I will hate, and some more that will fall into this middle ground of "meh-ness."

I think I have learned that I cannot love everything I read, but I can learn from it and appreciate it for what it did offer to me. Each of these books has been called a classic for a reason. Those reasons may not always be clear, but they are there and I need to realize that. I suppose for me, Sons and Lovers was a stepping stone towards that realization, a side-journey on my odyssey towards realizing that just like in life, I don't have to like everyone I meet.

Not every book has to become my best friend. But I should give it the benefit of the doubt and see it for what it is. And Sons and Lovers just left me feeling nothing.
Posted by Allie at 12:00 PM