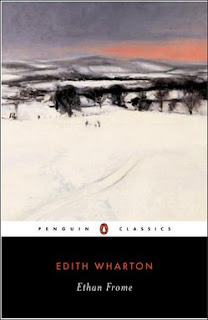 Every time I read Ethan Frome I find more to love. Perhaps it is my unabashed LOVE of Edith Wharton, and not necessarily that novel, but I love the story.

Ethan Frome is trapped in what appears to be a loveless marriage. His wife, Zeena, has constant ailments and sicknesses that prevent her from doing much of anything. Ethan's farm is constantly on the verge of going under as he is forced to work it alone. In a sense, Frome is trapped into a life that he never wanted. The only reason he was ever on the farm was to nurse his mother and father back to health. his dream had been to leave the small town life and travel for bigger and better things.

At the time the story begins, Frome is a broken down old man doing his best to keep his home running. He begins to befriend a new person in town, who eventually learns Ethan's story and relates it to the reader.

Prior to the novel beginning, Ethan and Zeena had taken in a young cousin of Zeena's, Maggie Quiksilver, to help around the house to to be Zeena's nurse. A young and beautiful girl, Maggie is also an orphan, with no where else to go. Ethan and Maggie become friends and spend a great deal of time talking to each other. Of course, Zeena is still around and shows her disdain and hatred for Maggie.

Things begin to spiral out of control until tragedy hits. When the story draws to a close, the young man recounts the results of the tragedy and the ruin of Ethan's life.

All of this is accomplished in a mere 77 pages, but the power of the story is like that of a far longer novel.

I have read a great deal of Wharton's work, minus a few novels, but I find that she often manages to create these powerful stories out of nothing. Most of her larger novels are about the upper class and society in New York and other large towns, but this is one of the only about a rural setting. And while many of her other novels are also tragedies, I think this one hits closer to home. I almost think it is a far more realistic version of tragedy.

In any case, I still love this little novella and the memories it holds. It remains one of my all-time favorite pieces of fiction. If you haven't read any Wharton before, start here and you won't be disappointed.
Posted by Allie at 9:00 AM