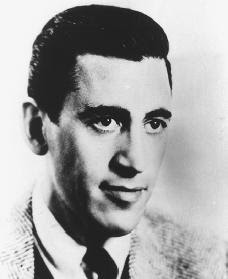 For those of you who haven't heard, J.D. Salinger passed away on Wednesday. He was best known for The Catcher in the Rye, Franny and Zooey, and Nine Stories.

I know that his loss is a big one to the literary world, even if he has not published any work since 1963. He has always been one of my favorite authors and I am sad that the literary world has lost so great a figure.

"Anyway, I keep picturing all these little kids playing some game in this big field of rye and all. Thousands of little kids, and nobody's around - nobody big, I mean - except me. And I'm standing on the edge of some crazy cliff. What I have to do, I have to catch everybody if they start to go over the cliff - I mean if they're running and they don't look where they're going I have to come out from somewhere and catch them. That's all I'd do all day. I'd just be the catcher in the rye and all."
Posted by Allie at 4:34 PM

Email ThisBlogThis!Share to TwitterShare to FacebookShare to Pinterest
Labels: Death, Franny and Zooey, J.D. Salinger, Nine Stories, The Catcher in the Rye