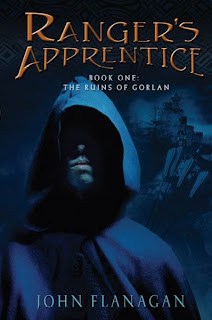 The one main problem I have with Young Adult fantasy is that most of it is geared towards females. You might argue with me, but most fantasy lining YA shelves revolves around vampires, werewolves, and witches, which seems to be more appealing to female readers. Also, once boys hit the teen years, statistics show that they read less. Those who do read, and like science fiction and fantasy generally start moving into adult literature because there is nothing for them at the teen level.

(And if you don’t believe me, go look at the shelves in your local bookstore. It will reflect readership. More females read than males, so literature reflects that).

As a teacher, I always had a hard time finding novels at the teen level for my male students to read. While Walter Dean Myers is always a great recommendation, sometimes my boy students wanted something with a little more fantasy. Since some adult fantasy can be over an seventh grader’s head, it was important for me to find something to fill that void.

On the eve of Harry Potter and the Order of the ’s release in bookstores, I was searching the shelves looking for other things to read when I came across a display that said, “If you liked Harry Potter, try these!” Most of things on the shelf were things I had already read (namely the Narnia series), as well as some standalone books. None of them caught my eye until I caught a cover. I know you shouldn’t judge books by their covers, but I do. I can’t help it. When a cover catches my attention, nine times out of ten I buy the book. It’s an impulse.

The book was called The Ranger’s Apprentice: The Ruins of Gorlan by John Flanagan. Reading the blurb, it sounded like something I would like, “He had always wanted to be a warrior. The Rangers, with their dark cloaks and shadowy ways, made him nervous. The villagers believe the Rangers practice magic that makes them invisible to ordinary people. And now fifteen year-old Will, always small for his age, has been chosen as a Ranger's apprentice. What he doesn't realize yet is that the Rangers are the protectors of the kingdom. Highly trained in the skills of battle and surveillance, they fight the battles before the battles reach the people. And as Will is about to learn, there is a large battle brewing. The exiled Morgarath, Lord of the Mountains of Rain and Night, is gathering his forces for an attack on the kingdom. This time, he will not be denied.”

It contained a lot of elements of fantasy that I personally enjoy: a well-crafted world, a likeable main character, and something unique. I bought the book and read through it in a few hours. I loved it and had to wait anxiously for the next book in the series to come out.

A few days ago, book 7 (Erak’s Ransom) came out in stores and I made sure to buy it, even though I won’t be reading it just yet. I am hoping that when I do get a chance to open its covers it will be just as amazing as the rest of the series.

The fact is, Ranger’s Apprentice is a great series for fans of young adult fantasy and for boys. Where a lot of popular YA fantasy is geared towards females, this is a remarkably male fantasy series. Sometimes authors make male characters unrealistic to teenage boys, but not Flanagan. The protagonist, Will, is a completely believeable, intelligent teenage boy who my male students immediately liked. In fact every male student I recommended this series to loved it. The fantasy elements are enough to still capture their imagination, but there are also well-crafted battle scenes and well-developed characters.

I find this to be a much better written and likeable fantasy than say…Eragon by Paolini. Where Paolini tries to hard, Flanagan tries just enough. His world is not contrived and everything unfolds in each of the books as it should.

This is a series I hope that any fan of YA fiction or fantasy will pick up and add to their collection. It would also make a great gift for those difficult to buy for teenage boys.

If you are looking for more information on the series and its author, please go to Flanagan’s website. There are games and such added on now, but it offers a lot of in-depth detail about the origins of the novels. http://www.rangersapprentice.com/