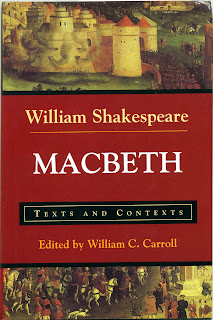 Of all of Shakespeare's plays, there are two that stand out to me as my favorites (so far). The first is a comedy, Much Ado About Nothing, which I read back in September/October. Much Ado About Nothing is a lighthearted fun comedy that really plays up the wit and banter between characters.

My favorite tragedy, if such a thing is possible, is Macbeth. Since the first time I read it in high school Shakespeare class, I was drawn to the dark and sinister tale of murder and witches. While tragedies like Romeo and Juliet are so wonderfully "romantic," Macbeth is simply dark and creepy. I like that. I like that honesty in the play.

I also believe it is one of the more straight-forward of Shakespeare's plots and a great place for beginners to start. The story itself is fairly simple. There is a battle raging and witches appear to make a prophecy to Macbeth. They tell him he will one day be king. Rather than wait and see what happens, Lord Macbeth takes it into his own hands...and well...murder happens.

What steals the show in this play, however, are the witches and Lady Macbeth. The witches seem to appear out of nowhere and give the play a very supernatural and sinister feel. They also have one of the most famous "witch" lines in literature in this play:

Hopefully that is familiar to you and now you know where it comes from!

Also creepy is Lady Macbeth, who begins to lose her mind near the latter half of the play. The first time I read the play, I physically cringed during some of her scenes.

The other thing that really stands out reading this play is that the "hero," Macbeth, is an evil evil man. Where you can sometimes feel for the victims in tragedies in some of Shakespeare's other tragedies (like Hamlet), Macbeth is just evil, and dark, and someone you wouldn't want to run into on a Scottish moor.

Anyway, I am looking forward to spending some time with an old friend! Let's see if I enjoy it as much as I have in the past.
Posted by Allie at 5:38 PM

Email ThisBlogThis!Share to TwitterShare to FacebookShare to Pinterest
Labels: Macbeth, Much Ado About Nothing, Tragedy, William Shakespeare