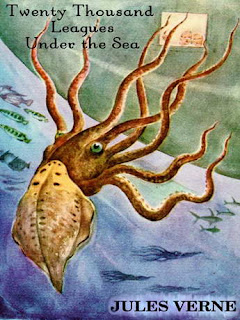 "The sea is everything. It covers seven-tenths of the terrestrial globe. Its breath is pure and life-giving. It is an immense desert place where man is never lonely, for he senses the weaving of Creation on every hand. It is the physical embodiment of a supernatural existence... For the sea is itself nothing but love and emotion. It is the Living Infinite, as one of your poets has said. Nature manifests herself in it, with her three kingdoms: mineral, vegetable, and animal. The ocean is the vast reservoir of Nature."

I am not as well-versed in older science-fiction as I ought to be. I mean, I declare a fierce love for modern science-fiction, so what makes me wary of the old stuff, the original?

Perhaps I owe that impression to my first read of a Wells novel, The War of the Worlds, when I was back in college. I read it on a whim and hated it. It was boring, moved way too slowly for my liking, and wasn't as exciting as the more modern pieces I was used to reading.

When I was setting up a small science-fiction unit to do with my sophomores in April, I realized I should probably know a bit more about some of the pioneers in the genre-namely Wells and Verne. I tried, at the time, to get around to reading something by Verne, but just lacked the opportunity to do so. So I knew that I needed to read something this summer so I wouldn't feel as guilty about addressing it with my students. :)

Verne is very different from Wells. Where Wells seems to promote the idea that too much progress is bad for society, Verne seems to encourage progress. More progress equals better things for humans. This is one of the things I continually ran across in my research, and now that I have finished Twenty Thousand Leagues Under the Sea, I agree. Verne does seem to promote progress and expansion. 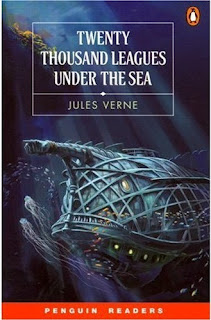 For anyone unfamiliar with the novel, Twenty Thousand Leagues Under the Sea opens with a small amount of mystery. There have been a few incidents in the ocean of a large sea creature. In a couple cases it was simply spotted, but in another, it significantly damaged a large ship. The world is in an uproar since a creature of this magnitude hasn't been seen before! An expedition is started in the United States, and the famous Professor Arronax joins last minute (he is an expert in sea life, etc).

What the expedition soon finds out is that the creature is not a creature, but a large submarine, captained by Captain Nemo. Arronax and two others are captured and spend the next few months aboard the Nautilus exploring the oceans of the world.

This novel is FASCINATING. For being published in 1870, the descriptions and ideas are remarkable. You can tell from the beginning that Verne had a great imagination and background to write this kind of tale. The descriptions of the ship, the technology, and the way of life aboard the ship shows the amount of research and planning Verne had to do before even attempting to write this. It makes the whole thing plausible, which really is the basis of any good science-fiction.

*side note* The easiest way to tell fantasy and science fiction apart is by asking what is plausible. If it has any kind of scientific background, any kind of "possibility," it is most likely science-fiction. Fantasy is usually based in the magical.*end side notre*

The scenes from around the world really captured my attention. Verne did a great job of showing different places and climates through his words, as well as giving insight to the creatures of the deep. This is, however, my one big critique of the work. Half the time, when he was describing creatures and fauna, I had NO idea what he was describing. There was a lot of scientific jargon and classifications that went way over my head. Sadly, I skimmed a lot of sections. I just couldn't picture the animals in my head. So I used my imagination instead. Hopefully Verne would be proud. :) 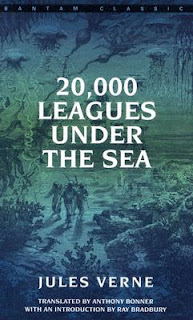 As for the characters, I loved that Verne kept an aura of mystery around the figure of Nemo. We learn bits and pieces about this past throughout, but we are never given answers to everything. I bet this would be frustrating for many, but for me, it added to the excitement of the adventure. Arronax is a little annoying when he rambles on about the creatures (see above), but he is an honest narrator. As a scientist, he often presents the facts to the reader before giving his own emotional spin. I also really loved Ned Land, and felt for him dearly (you'll have to read it to see why).

But overall, I was impressed with the scope of this novel. Again, for a novel published in 1870, I was amazed by the level of science and imagination. I think that this has stood the test of time and would truly capture anyone's imagination.

A Couple Other Things to Note:
When I searched for images to accompany my little review, I was floored by all the lovely images. Go do a Google search-so many wonderful covers!

Walt Disney World used to have a ride based on the book. It closed in 1994. How amazing would it be to have a theme-park based solely on novels? Here is more information about the ride.

This is the first full novel I read on Homer, my NookColor. It was a great reading experience. I will say that my eyes tire faster reading on Homer-mainly because it is backlit (because of the color option).