Book 107: The Death of Ivan Ilych by Leo Tolstoy (Art of the Novella Challenge). 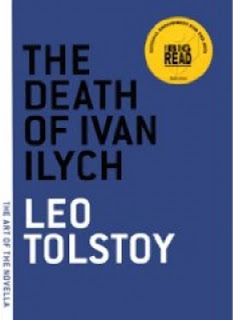 When Frances first posted about her "Art of the Novella" reading challenge, I was completely shocked by her goal. I mean, 42 novellas in one month? Amazing. Then people started to join in, and I did as well.

I was aiming for three titles, but right now, I've only read one-The Death of Ivan Ilych by Leo Tolstoy. I have been eying this one ever since the beginning of my little project. It was in the first big stack I had on a my nightstand, but reading it then (the fall of 2009-right before my wedding), just never seem to fit. I mean, death and weddings shouldn't really go together, right?

I am glad that I waited. After all, I have already tackled one of the big Tolstoy titles on my list (I am speaking of War and Peace of course), so a small foray into Tolstoy was perfect. I already knew a bit about this writing style, so I knew what i was getting myself into.

And I have to say, I really enjoyed the shorter version of Tolstoy. The Death of Ivan Ilych is about death, but also about redemption. Ivan Ilych is a man who has only lived for himself. He does things throughout his life to please what he enjoys and likes. He pays little attention to his wife, spends well beyond his means, and seems to form few lasting relationships with those around him.

He ends up banging his side as he is decorating, and soon falls ill. The doctors cannot fix him, and it soon becomes clear that Ivan is dying. As the reader sees Ivan on his death bed, it doesn't seem like he has learned anything. You would think that the knowledge of an imminent death would have some kind of profound impact on a person, but it doesn't. Instead, he rails and screams-rejecting the notion that his life will soon be over.

But it is really in the last few pages that the reader sees the truth in Ivan. Face to face with his end, he begins to feel. He realizes just what is being left behind and what the impact of his death will most certainly be to those around him. Ivan also begins to realize that one should not fear death if one has lived a great life. In the end, it almost seems as if he embraces death and what it brings him.

For such a short little piece, The Death of Ivan Ilych, packs a profound punch. Of course mortality has been addressed countless times in literature, but I enjoyed the intense focus on Ivan and his ordeal with death. And while I don't think Ivan is someone I necessarily sympathize with, I had to admire the grace he had at the end. I mean, I won't lie, I fear death. But as I write this, I am 26, happily married, and focused on achieving many more things in my lifetime. I hope, that by the time death comes for me, I will be able to face it with as much grace as I can. I don't want to fear death because my life was not what I wanted.

I definitely believe this is a title I will return to countless times in my life. It was emotionally stirring, passionate, and very real. I also think it was a great small chunk of Tolstoy's writing, and I would definitely recommend it if you are scared of conquering one of his larger works. This might be the small introduction you need!

What did you think of this one?