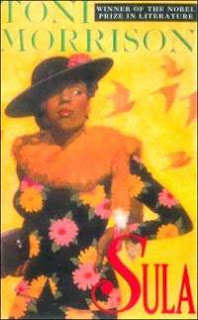 "Lonely, ain't it?
Yes, but my lonely is mine. Now your lonely is somebody else's. Made by somebody else and handed to you. Ain't that something? A secondhand lonely."

My first exposure to Toni Morrison was The Bluest Eye, book 11 off my list. I loved the novel. It captured so many parts of me that I thought about it long after I closed it. It also didn't hurt that if was the first book I read after my torturous reading of Dickens' Great Expectations. But I loved the simple honesty of the story, the fact that Morrison seemed to acknowledge the ugly side of humanity as a fact.

So I was looking forward to Sula. And for such a short read (I believe it took me just after an hour to read it), it packs quite an emotional punch. Sula, the title character, has been best friends with Nel for almost all her life. And while the two characters don't have that much in common, they both betray one another in the end.

Where Nel seems to be sweet and calm, Sula is anything but. Where Nel's mother worries about her daughter's appearance and life choices, Sula's mother sleeps with men throughout her home and often exposes her daughter to the men who tramp through. One is soft, one is hard; one is outspoken, one is calm. It is an interesting juxtaposition, these two characters.

But the story really takes off when Sula and Nel are grown. Through tragedy and lies, they somehow make it to adulthood, and their lives are forever changed. Nel is married, happy. Sula disappeared from town from years, and returns to put herself up to the same mischief her mother did. It makes things awkward and uncomfortable in town. Then Sula crosses the line. She becomes the pariah of the town, unwanted, called a whore by people in the town.

It is an interesting narrative and makes you question why we judge women and men the way we do. Why do we still accept and encourage these kinds of double standards? I got that, the power of that message from Morrison's writing. It make me think. And I loved that.

However, I didn't feel as connected to Sula as I could have been. Perhaps it is because I chose to read this after Ceremony, which is hand's down one of my favorite books of the year. This one, while interesting and provocative, didn't capture my attention the way it should have. I accepted it. Now, that might also be because we HAVE made strides since the time it was published, but shouldn't I have felt more of an emotional impact? It might also be the length. At only 174 pages in my edition, I felt like something was lacking. I wanted more development. It was hard to sympathize with Sula when I didn't really know her, or is that the point?

In any case, while I can accept its merit and value, it just isn't going to be a favorite of mine. It just paled in comparison to my memories of The Bluest Eye.

Have you read this one? What did you think?