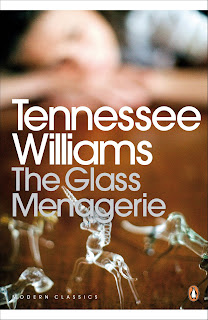 "In memory, everything seems to happen to music."

The more plays I read, the more I realize that I know nothing about drama. I wish I would have taken a course in it in college, but at the time, plays really didn't interest me.

I do know that Tennessee Williams is one of the big ones, one of those playwrights most people have at least heard of. In addition to this play, I have A Streetcar Named Desire and Cat on a Hot Tin Roof left on my list. And if they are even half as good as this play, then I am in for an amazing treat.

The Glass Menagerie is a play that should probably be seen rather than read. It is full of musical cues and lighting to emphasize different aspects of the play and characters. What I love best, however, is that the play is performed like a memory. The music and lighting are the products of Tom Wingfield, our narrator and leader through the production.

It begins with Tom explaining that what we are about to see is based on memory-this is what he remembers and finds important for us to see. I love this introduction he gives us,

"Yes, I have tricks in my pocket, I have things up my sleeve. But I am the opposite of a stage magician. He gives you illusion that has the appearance of truth. I give you truth in the pleasant disguise of illusion."

It is obvious from the beginning that Tom has left the family. He mentions in a roundabout way that this is how he remembers them, leading us to believe he hasn't been back. But that's okay, because we learn why.

The play only contains four characters, Tom, his mother Amanda, his sister Laura, and a friend from work named Jim. The family was abandoned by Tom and Laura's father before the play begins. And it is apparent from the beginning that Amanda has worked hard to maintain what little they have. But she is obsessed with the past and what she used to have (in one scene, she decks herself out in a silly gown, much to the embarrassment of Tom). It is clear she wants bigger and better things for her children.

Tom seems to have his head on straight. He works hard in a warehouse doing who knows what. He spends his spare time writing and seeing movies. It is clear he wants more than what he is doing, but he seems to be biding his time, waiting for the right moment. We also know, based on their altercations, that Amanda does not approve of his choices. She wants him to continually support herself and Laura. This leads to a lot of uncomfortable moments. 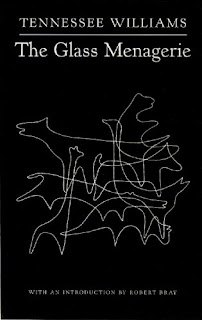 Laura, on the other hand, is an extremely shy and sheltered kind of a person. She stays at home with her mother, plays the piano, and has a large collection of glass animals that she cherishes. It is clear that she just can't function outside the home. But Amanda wants her to marry, to have possessions and a wonderful life, like she once had.

This is where the conflict comes into play, where everything shatters. Amanda convinces Tom to bring a friend home from work to introduce to Laura as a suitor. So Tom does, and Jim arrives at the house for a meal and to get to know Laura. This is where everything breaks apart, the family splits, and Tom eventually leaves.

What stood out to me most in this play was what was said between the lines. Being set in the 1930s, this play definitely addresses the ideas of an American Dream and consumerism. The characters, Amanda in particular, want things that they cannot afford. She continues to dream big, even when it cannot become a reality for her.

I loved this. I loved the way it was written, that it flashes between Tom speaking to the audience and scenes in the home. I love that it addresses issues that are American and universal all at once. Most of all, I loved Laura. I felt for her shy little self as she struggles to voice what she wanted. I felt her pain in the last scenes and understood her in a way that Amanda and Tom could not. It was just a beautiful play, and I know that I must go see it performed. It touched a very human part of myself, as cheesy as that may sound.

But most of all, I can't wait to see what Williams' other plays are like and if they punch as much emotional impact as this one did.

"I didn't go to the moon, I went much further—for time is the longest distance between two places."