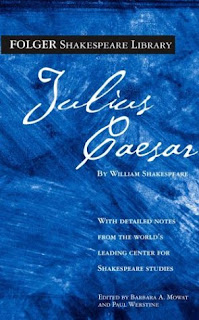 “Cowards die many times before their deaths;
The valiant never taste of death but once.
Of all the wonders that I yet have heard,
It seems to me most strange that men should fear;
Seeing that death, a necessary end,
Will come when it will come.”

I had decided all the way back in August that I would attempt to read a number of Shakespearean plays for the October 22nd Readathon. By the time the day came around, I was a little grumpy, so I only read one. But what a play it was!

This was only the second time I have read Julius Caesar. The other time was in college for a project (we had to create a wiki with assignments on it for the play-and I feel I should tell you I just spent 10 minutes searching for the wiki but it appears to have been taken down. Bummer). I was partners with this guy named Frank and he is the one who picked the play. It was his "FAVORITE" so we had to do it.

I obviously had to read it before I could make lessons for it, so I read it over a long weekend and I kind of loved it. I wish, that instead of the whiny Hamlet that we read when I was a senior in high school, we would have read this one!

Julius Caesar is about the plot to kill and overthrow the great Caesar. The play opens with a sense of slight mystery. There are plots among many of the statesmen, who all come to a consensus that Caesar is power-hungry and will destroy what they have built. They come to this conclusion based on what they want to see...so it all seems ridiculous.

We also get the strange man saying to Caesar,

“Beware the ides of March.”

This crazy old coot attempts to warn Caesar of what may come, but it seems Caesar doesn't care. After all, he continues to meet with those closest to him, not seeing that they may be in on the plot.

But of course, Caesar delivers one of the best lines of the plays when he looks at his friend and confident and says,

That line got to me the first time, and it did this second time around as well. There is something about a big manly man like Caesar being betrayed by a friend that bothers me. It goes to show you that while you may think a friend has your back, they may be plotting to stab you in it (that was my attempt at a bad joke. sorry).

In any case, the play is actually fairly straight-forward after the murdering. The men responsible realize they must get the rest of the Romans on their side, so they send Mark Antony to speak to them. This is where he delivers his famous speech,

"Friends, Romans, countrymen, lend me your ears;
I come to bury Caesar, not to praise him;
The evil that men do lives after them,
The good is oft interred with their bones,
So let it be with Caesar ... The noble Brutus
Hath told you Caesar was ambitious:
If it were so, it was a grievous fault,
And grievously hath Caesar answered it ..." (it continues...)

The last two acts detail what happens to the nasty conspirators after they leave Rome, and I don't want to give away what happens for anyone who doesn't know. But the end is good, and sets up Antony for Shakespeare's Antony and Cleopatra (which I haven't read just yet. Maybe it will be next).

What I love most about reading Shakespeare is what I pull from it on each reread. And while I know Shakespeare is best when seen live, there is something about diving headfirst into the language that I really love. He was a master!

And while I think I am getting pretty good at pulling meaning and making my own interpretation of his words and phrases, it helps to have a good edition. 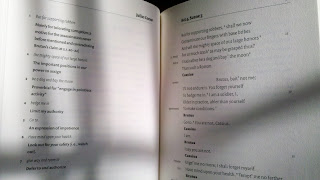 I have two sets of editions that I read from-either Folger's or the Barnes and Noble Shakespeare series. I really like both, and both have their upsides and downsides. The image of the open book shows the inside of my Barnes and Noble edition of Julius Caesar.

It is a well-done edition. I love that the right page is the play, and the left side contains corresponding notes. It makes references easier to follow and the explanations aren't dumbed down. The Folger's editions are similar.

As I continue to read more of Shakespeare's works, I find myself looking less and less at that left page. Perhaps that has to do with my comfort level, or I just think I know more than I do... ;) But really, I feel very comfortable with the Bard, and he has become a bit of a comfort read for me, if I dare to say that.

Anyway, I leave you with this. Julius Caesar is really a marvelous play-with a great deal of plotting, intrigue, scandal, and action. I am sure that if I ever have the opportunity to see it live, I will. But you should also give it a try sometime!

I leave you now with three things. First, the knowledge that I am hosting a month-long Shakespeare event (details to come) in January-so you should read this then, a picture of one of my kitties cuddling with my copy of the play, and a last few lines. 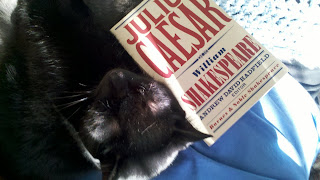 “There is a tide in the affairs of men
Which, taken at the flood, leads on to fortune;
Omitted, all the voyage of their life
Is bound in shallows and in miseries.
On such a full sea are we now afloat;
And we must take the current when it serves,
Or lose our ventures.”
Posted by Allie at 10:00 AM