It has been a little over a month since I last did a nightstand pile post. Basically, I always pull books that interest me from my shelf to put in a pile on my nightstand. When I'm looking for a new book to read, I go to my pile rather than my bookshelves (most of the time-you know how that goes).

With the Victorian event ending, school lurking in the not so distant future, and my reading challenges going relatively untouched, I put back almost all of the books I had left from the last nightstand pile and pulled new books. Some are repeats, others are new. Well, let's just see them, shall we? 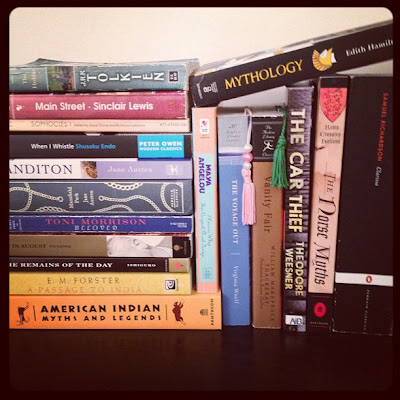 From top to bottom, then left to right:
There you have it! My nightstand pile for the next couple of months. I'm sure I pulled too many books, but I think that's a good problem to have!

Let me know what your reading plans are!
Posted by Allie at 8:00 AM