A Lot of Book Loot.

I wasn't game for editing a review for today, so I was looking for something different. Then, my husband obnoxiously said, "Why don't you show them all those new books you've been getting?" He's a smart man.

I used to be really good about showing new books, but I haven't done a book loot post or picture in a really long time! I don't even remember what I have/haven't posted about. But, I think I gathered a good chunk of titles to show off, and while they don't include everything I've gotten in the last six months (that would be embarrassing), this includes a LOT of what I have gotten.

I do want to note that I purchase almost all of my books. Once in awhile I get a book for review, but considering what I do review, that isn't very often. :) And I am aware that the amount of books I buy makes me seem ridiculous, but I'm perfectly okay with that. I like buying books. And generally speaking, I stick to my monthly book budget (which Matt (the husband) strictly enforces). In any case, here are books that are new to my shelves.

**All the pics were taken on my phone, so I apologize if they aren't perfect. I'm not a photographer by any means. :)** 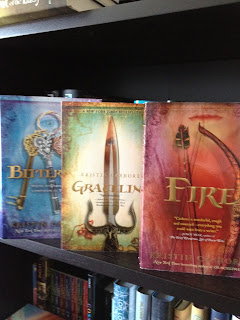 (This and the next ____ pictures were taken in our office. The shelves I have in here are YA, Science-Fiction, Fantasy, and History type titles-you'll see some peeking around in some of the pics).

I've heard a lot of good things about Kristen Cashore and her books, and I finally picked up Graceling after Christmas with a gift card. It was an AMAZING book, so I ran out and picked up Fire and Bitterblue as soon as I finished. Fire was also pretty good, and Bitterblue has been sitting on my nightstand waiting for me to read it. I read both Graceling and Fire in long sittings, so I am saving Bitterblue for such an occasion. Most likely I will get to it during the readathon on Saturday. 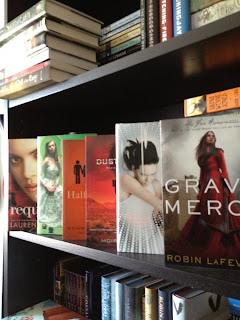 Next up is a wide assortment of YA titles (from left to right): 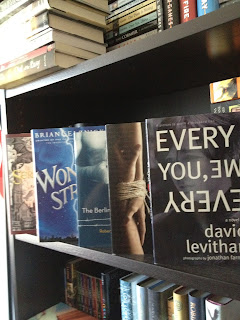 This is another chunk of YA (from left to right): 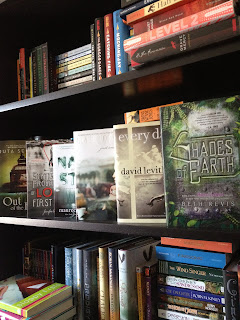 And more YA-sorry these are harder to see (from left to right): 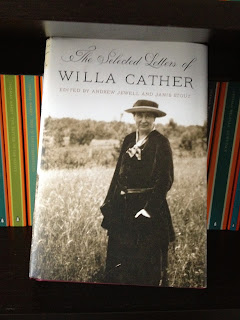 This is actually the newest title being added to my collection-it arrived on Thursday! This is the new collection of Willa Cather letters (I pre-ordered), and I'm looking forward to reading it for my Willa Cather Project. I will say that this book is a lot bigger than I was expecting! 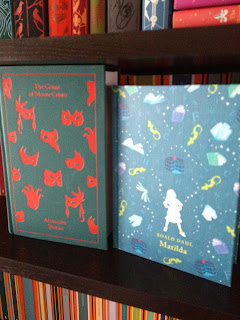 I switched locations, can you tell? The rest of the pictures were taken in our living room, which is where I keep my classics. Above are the two newest additions to my Penguin Clothbounds and Puffin Hardcovers. The Count of Monte Cristo by Alexandre Dumas is the newest clothbound (although, I just found out Vanity Fair has been released, so I will definitely be buying it soon). This is one of my favorite books of all time, so I'm excited to have it in such a lovely edition. I also found Matilda by Roald Dahl at Pottery Barn Kids when I went shopping with my mom and niece. My mom was semi-embarassed by my squealing when I saw it. I don't know if Puffin has released any others to go with their set, but I will continue to add on as they release (let me know if you've heard anything!).

(To my knowledge, I think I own all of the Penguin Clothbounds and Puffin Hardcovers with the exception of Vanity Fair and the 2 titles that only had one printing and were only available in the UK-Madame Bovary and Crime and Punishment). 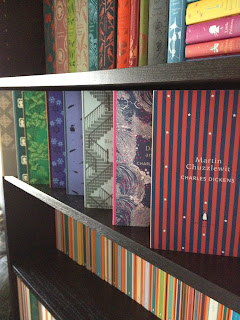 I'm not going to give titles, because I am pretty sure I have bought more than what these three pictures will show you. I know that I finished collecting the Dickens titles (all 16 of his major works), as well as the Hardy titles and Trollope series (The Chronicles of Barsetshire). My shelves are filling up with these lovelies, and I think I only have about 28 to go? Not bad considering I started collecting about a year ago and there are 100 titles (or that could be considered sad...or pathetic...or obsessive-you pick).

I really like the difference in the covers for the Dickens titles (the 5 on the right). That's one thing I love about the series as a whole-each book has a very distinct cover. Another of my favorites is the title for Robinson Crusoe-the gorgeous green with the leaves near the left. 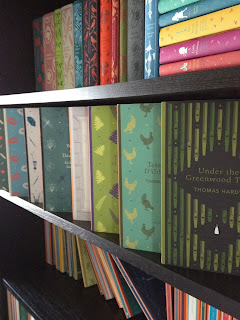 I find it funny that some titles are really hard to find. I struggled to get a copy of Howard's End by Forster (the white title with the umbrellas). It was "sold out" on The Book Depository for a long time, so I finally went searching on Amazon and found a copy. The same recently happened for another of Forster's titles. Odd, right?

And I want to point out that I love that Hardy cover on the far right-Under the Greenwood Tree. It's beautiful in person. 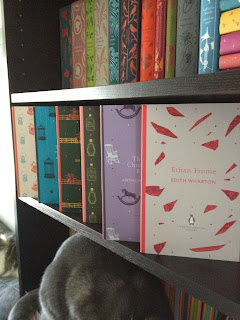 And a few more-including some by Henry James, Trollope, and Irving. The white one on the far right is Ethan Frome by Wharton. This is my third copy of the book (I KNOW), but I can't help it. The other two editions I own are the old Dover Thrift version that I was given from my 12th grade English teacher (we all got a copy to keep when we read it together) as well as another Penguin edition. Wharton is a favorite of mine, so I don't feel bad hoarding her books. 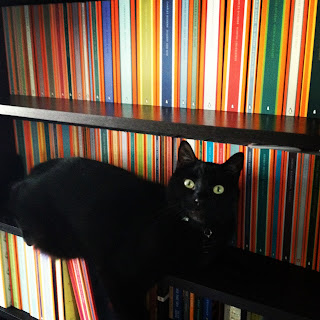 And, from a couple weeks ago, Sparty on my bookshelf with all the PELS as a background.

Anyway, there you have it-a whole lot of books I've purchased in recent months. And, if you're looking for them, I've bought all of my PELS (with the exception of Howard's End and a couple others) through The Book Depository. I haven't found any of them in a physical bookstore around here, so I just order them in batches and have them sent. My only complaints are that it takes a bit of time to get them, and they always come packaged individually, even when I order a number of them together. I find that annoying and a waste of packing supplies! They're also pretty affordable-obviously the thicker titles cost most, but they cost the same as any other edition. The covers are beautiful (some more so than others), and they're well made.

And before anyone asks, I do read my copies (I also read my clothbounds). As I have purchased, I've gone through my shelves to pull any duplicates in other editions that I might own. I have a stack of dupes for an upcoming giveaway, so look for it. :)