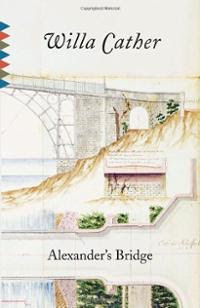 Alexander's Bridge was Cather's first published novel, debuting in 1912, one year before O Pioneers! I knew that this one wasn't part of the "pioneer" series, so I was curious what early Cather would look like.

The novel is about Bartley Alexander, a world renowned bridge builder and his wife. The Alexanders live a wonderful life in America, supported by the success of Bartley and his constructions. And while Bartley has been successful and his wife supportive, he still finds the need to engage in an affair with Hilda, his old flame who lives in London.

As he continues to live his life, its obvious that Bartley has struggled to keep tabs on exactly who he is and what he wants from life. In conversations with his wife, it becomes apparent that Bartley has become a man of inaction. That seems surprising. I'm sure that anyone who is successful at their craft will vouch for the fact that they had to take action and make decisions to get to that level of success. Bartley, at the point in which the reader meets him, doesn't take action. He goes with the flow-he allows his wife to dictate their home life, he agrees to poor materials being used for his new construction. He doesn't make an effort.

This is where Cather's whole metaphor comes into play and the title of the novella. Hilda and Bartley's affair in London is his bridge to the past and his decisions to take action. To make something of himself and change his fortune. His relationship with his wife is the bridge to the man he has become. A man of inaction and poor decision. Then, of course, there is the bridge itself. The bridge is a product of who Bartley has become-a man of weak constitution, a man impacted by the elements around him, and a man who is ready to crumble at any moment.

So of course there is the ultimate climax where Bartley is tested as a man and the results of these bridges and their connections to Bartley come to a head.

And while I loved the concept of this, I didn't love the end result. I actually found the book to be too short and too obvious. It was clear after only the first 20 pages what the end result would be, and what kind of a man Bartley would turn out to be. But, I also found that Bartley wasn't developed enough. I didn't care enough about him to worry about his decisions, or to wonder why he changed to being a man of inaction and poor decision making. And the bridge metaphor? It was just...obvious.

After reading some other reviews online and insights from the Willa Cather archives, it's clear that this novel was more plot driven than character driven. From my own experiences with two of Cather's other novels (My Antonia and O Pioneers!), Cather eventually shifts more attention to her characters, and personally, I find that to be more successful. And, generally speaking, I love character driven novels more than plot driven anyway.

In all, I enjoyed the novella and the concept behind it. I just found Cather's inexperience as a novelist to be a bit too apparent. I know her next novel was O Pioneers! so I am looking forward to seeing that transition in action.