The Paris Wife by Paula McLain. 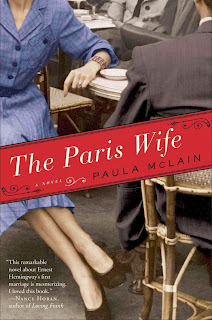 “It gave me a sharp kind of sadness to think that no matter how much I loved him and tried to put him back together again, he might stay broken forever.”

I'm not all that familiar with Ernest Hemingway. I've read some things by him-A Farewell to Arms, The Sun Also Rises, and a few short stories-but nothing that really sticks out in my memory. I know that I never studied him in depth while at college, and I only have faint memories of my tenth grade English teacher telling me to give him a try.

What I do know is intriguing. I know that his style is simple in that he tries to remove emotion so that the reader can form their own opinions and thoughts about the action. I also know he was a bit of an alcoholic, married a few times, and committed suicide. I also know that Hemingway spent a lot of time in Michigan as a youth (we visited one of his favorite bars in Petosky this summer-I sat in his chair).

But really, that isn't a lot to know about him. And while I know that The Paris Wife is a fictional account of his first marriage to Hadley Richardson, it made me want to get to know Hemingway on a more intimate level this coming year (thus, why A Moveable Feast, a book lingering on my shelf for years, is on my TBR Challenge list).

So, The Paris Wife is mainly told from Hadley's point of view. It starts with her as a 28-year-old first meeting the younger Ernest Hemingway before he published much of anything. They fall in love, get married, and move to Europe. It is only once they are in Europe that Hemingway begins to write in earnest (no pun intended....okay, maybe a little) and starts to make connections with the literary greats of the era.

I loved those portions of the novel-the characters meeting figures like Fitzgerald and his wife, Gertrude Stein, Pound, and more. It brought to my mind all their wonderful work, but also reminded me of the importance of connections in the literary world.

However, it wasn't just those literary figures that made the book work. It was the fact that Hadley's love for Ernest was just so raw and real. Hadley truly understood Ernest's passion and desire to write and fully supported it. She left her home and family to live with him in Europe and continually put his desires above her own.

“Why is it every other person you meet says they're an artist? A real artist doesn't need to gas on about it, he doesn't have time. He does his work and sweats it out in silence, and no one can help him at all.”

The novel unfolds as they deal with challenges to their relationship from within and the influence of those around them. As Ernest starts to gain success, he pulls away until his inevitable affair.

The last 50 or so pages of the book were probably the most interesting of all. I knew, prior to reading the novel. that Hemingway had a series of wives, so of course, it was to all crumble. And crumble it did. And while McLain explained in a series of questions I read online, no one really understood why Hadley let what happened....well, happen. So, McLain's take was insightful.....and I don't know how true it is, but it fit the character of Hadley that McLain constructed.

In all, The Paris Wife was a beautifully written book. The bits about falling in love and being in love resonated deep with me. I've also got spiked interest in reading some of Hemingway's other work in the future, so it was inspiring on more than one level. This is one I definitely recommend!

“Books could be an incredible adventure. I stayed under my blanket and barely moved, and no one would have guessed how my mind raced and my heart soared with stories.”

*I'm still getting in the habit of writing again. Forgive me if I'm awkward for a bit!*
Posted by Allie at 8:00 AM