It simply amazes me how fast time goes! Over a month and half have gone by since I last wrote a Sunday Salon entry, but it doesn't feel like it. I suppose a lot has gone on in the last month and a half. I got married, went on my honeymoon, moved out of my parents' house, and have settled into life in the apartment.

This last week has been especially eventful in our house. Since getting back at the beginning of January, Matt and I have been searching high and low for a kitten. We already have an adult cat, Hemi, who has been with Matt nearly her entire life. She was found, abandoned, under his sister's front porch. His mom and sister helped bottle-feed her until she was old enough to eat normal food. She's probably never even seen another cat, seeing as her eyes were still closed when they found her!

Since moving to the apartment, Hemi has been lonely. There is a lot less hustle and bustle going on over here, so we decided she needed a buddy. But it is HARD to get your hands on a kitten! We tried Craigslist with no luck, then turned to Petfinder.com to search some local rescues. I was getting discouraged until Thursday afternoon when I stumbled on the cutest group of kittens. They had Star Wars names, so it was pretty much meant to be.

By the time we got to the shelter Friday morning, 2 had already been adopted, leaving us with the choice of Vader or Leia. We ended up bringing Vader home, and he is a spunky, mouthy little thing of 6 and a half weeks old and we are already in love with his precious little face. Hemi, on the other hand, was not to excited and starting hissing and growling immediately. After belatedly reading up on introducing cats to one another, we corrected out mistakes and isolated him, so she could dominate the house.

It must have worked. Tonight both of them were in the same room, playing and walking around with minimal hissing. I think in a few days they will be the best of friends and we'll find them cuddled up together.

We did change his name, to Spartacus, or Sparty for short. My college mascot is a Spartan and we both go up yearly for games and events, so we thought it fitting. As soon as he is less squirmy, I am sure he will end up in some pictures with books. He has already tried eating them, which I told him was definitely a NO.

Anyway, here is a picture of the little guy trying to climb up my leg: 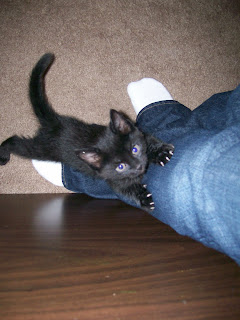 
In book news, I have been working on trying to catch-up on the backlog of books I have. There are only 2 more books to review and discuss before my current novel. Look for entries on Ethan Frome and Sons and Lovers in the next few days. I don't like being behind, but it does give me more material to write more often!

I have also been trying to get back into the habit of reading every night before bed. It has been difficult to keep up that good habit in the last 6 months or so. I have been so busy with wedding planning and moving that reading took a far back seat. It is time to shift some other things around to make room for reading as a priority. Even if I don't have as much "me" time anymore, I still need to make an effort to continually read.

I'm halfway through my current book, The Dollmaker, and I have a lot to say about it already. It is definitely a chunker of a book, at over 600 pages. Even more difficult is the dialogue. While I love when authors make their characters sound like the region they're from with phonetic spellings of words, it makes my brain work a little harder, making my reading pace slow down. Oh well, I still enjoy it and my brain needs the work out.

Anyway, the goals for this week are these:
I think those are all perfectly doable. Let's hope for a good week of solid reading, yeah?

Oh! And one last thing! I have a new poll up and would appreciate you voting! Have at it!
Posted by Allie at 9:00 AM