Classics Circuit: The Winter of Our Discontent by John Steinbeck (Book 102). 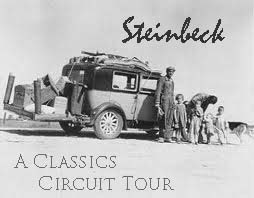 "I wonder how many people I've looked at all my life and never seen."

I am happy to be a stop today for the Steinbeck Classics Circuit! For anyone unfamiliar with the circuit, it is a way for bloggers around the book blogging community to highlight some classic authors and their works! For a period of time, different bloggers will be posting their thoughts on the works they read. There are new posts every day, so I hope you'll head over to the Circuit's blog to check it out!

I was really excited to see that this circuit was going to be for John Steinbeck! I am relatively new to Steinbeck's work, but I have had a couple of really positive experiences. I am well on my way to declaring Steinbeck a favorite for life.

Since I only had two of his novels left on my list, I feel I had an even harder choice. I decided long ago to leave The Grapes of Wrath until nearly the end of my project (mainly because I feel like I am going to LOVE it), so The Winter of Our Discontent was it for me!

I was unsure what to think going in. Truth be told, when I was making my project list nearly two years ago, this novel was placed on the list instead of East of Eden purely because it is my brother-in-law's favorite by Steinbeck. I was hoping Kyle would have great taste. Turns out, he did.

What Steinbeck does so well is capture the heart and spirit of Americans in different locales. I have found this to be true in the two other titles I've read (Travels with Charley and Of Mice and Men). He takes a small community and truly brings it to life. And while the characters in this one aren't necessarily lovable, he makes them realistic. They aren't perfect and their flaws are what drive the novel. I felt for them with every turn of the page.

Ethan Hawley came from a wealthy family, but the family lost their money years before. Rather than being one of the most wealthy and influential families in town, the Hawley family suffers from some humiliation. Ethan works as a store clerk under a foreigner, his kids want what all the other kids have, and his wife seems to just make do with what she has. Ethan seems to struggle with who he is and where he wants to be. He wants money, assuming that having more of it will make his problems go away.

So Ethan makes some phone calls and has some conversations that change his life dramatically. In the end, he gets what he wants. But, as the reader, and being inside Ethan's head, I had to ask myself for him, "was it worth it?" The fact is, Ethan does things to set his life in motion, at the expense of others. He gets what he wants by doing some pretty underhanded and immoral things. How could he possibly enjoy his new lifestyle?

It is an interesting question Steinbeck poses. You can tell that throughout the novel Steinbeck has a very specific purpose in mind-to explore the moral degradation of America and her citizens. We all know that the American dream is to climb as high as you can on your blood, sweat, and tears, but it also comes with a price. Ethan Hawley seems okay with the price he pays (I wouldn't be).

I was reminded a bit of The Great Gatsby when I read this. In Fitzgerald's novel, he also explores the American Dream and the rise to the top. He also shows the fall. Steinbeck and Fitzgerald both show how sometimes to get to the top, things have to be done. People have to be hurt. They both come to different conclusions, but the moral seems the same.

In the beginning, I felt for Ethan. As someone who also works in a pretty crappy job, it is hard to keep your chin up and eyes focused on being okay with your status in life. But, as Ethan began to explore a seedier lifestyle, all similarities stopped. He seemed unfazed in hurting those around them or watching them fall.

You have to wonder, how many people have done the same?

Do they think it was worth it?

Anyway, this was a fast read that kept me on my toes. It also makes me yearn for more Steinbeck, but I'm going to be strong and hold out.

How many of you have read this one? Love it, hate it? What other Steinbeck novels should I read in the future?

Email ThisBlogThis!Share to TwitterShare to FacebookShare to Pinterest
Labels: Classics Circuit, John Steinbeck, The Winter of Our Discontent