Book 113: I Battled the White Whale and Finished. 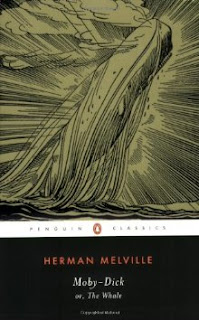 "Moby-Dick seeks thee not. It is thou, thou, that madly seekest him!"

I have spent over a month battling the white whale and reading Melville's words, and I am finally finished.

I don't say that with a sense of exasperation or with thankfulness. Instead, I am saying it with pride. I think Moby-Dick encompasses a great deal of fear for many. It is a large book, which sometimes focuses on the mundane, but it does so with such power that I think it intimidates. But I am finished. And I loved every page of it.

I think, that to truly appreciate Melville's work, we also have to appreciate the man behind it, as well as the times. Melville was an under-appreciated and underrated writer in his lifetime. While his first few books, including Typee which I read in college, had great success, Moby-Dick and some of his later works were flops. They didn't grab hold of their audience and many waved them off. Melville passed away with little "to-do" and underrated for his greatest novel.

In my opinion, I think Melville and Moby-Dick were ahead of their time. When it was published in 1851, Moby-Dick was too close to the times and the people. I think now we can appreciate what Melville did and what he accomplished.

Because not only is Moby-Dick about the battle of Captain Ahab and the whale who haunts him, it is also a great deal about the American spirit. Still young, the U.S. was fighting to find a place in the world amidst powerful nations who helped found us. Like Ahab, Americans were pushing out and conquering their demons of the past.

And, like Ahab, Americans were consumed by obsession, the need to move forward, conquer what land they could, and progress. Ahab is a man driven by obsession and revenge against the animal who took his leg. He convinces his crew to go along with his drive to find and kill the whale Moby Dick, and pushed them onward at all costs.

It is a novel full of that underlying throbbing passion. Between the mundane descriptions of whale anatomy, discussions on religion, savages, and relationships, the core of the novel throbs with the passion that Melville and his characters had for the sea. Because the sea called to them in a way that not many can understand. I think that some are meant for specific things, and those who choose to be career sailors are meant to be on the sea. The sea is something that many of us cannot understand. It is full of mystery, or power, and of things that we cannot see.

The sea drives the men onward. It is their home as well as the white whale's. It beckons to them throughout and while they think they understand its mysteries, they don't. I believe that is why Melville continued to focus on the little things about the sea and the ship. Where the sea and its creatures, including Moby Dick are natural, the men aboard their ship, their belongings, and their whaling practices are not. All those chapters of description, whaling gear, and objects are meant to show that while men believe they own and understand the sea, they are just strangers. They don't actually belong to that place.

I feel like I have to discuss the very end, so I am warning you here that I am talking about it in full detail. Skip down to where you see the line of stars to miss my discussion of the end.


When the end comes to the men aboard the Pequod, it comes fast. Part of me felt slightly robbed as I read the last three chapters, the only three chapters that the whale is actually in. I actually reread the end a few times before closing the book and setting it aside.

I determined that the end was fitting. Throughout the other 590 pages, Melville gives us the opportunity to know the men aboard the ship; we learn their struggles and personalities. So when the whale finally emerges, we cheer, hoping they will destroy the creature that has destroyed Ahab. It is gripping and frightening as they pursue the whale.

And then the end comes. As a reader, we realize that the whale is natural, he is doing as he wishes and as Ahab relentlessly pursues him, it all clicks into place. Ahab is obsessed with destroying what he believes has destroyed his life. Instead, Ahab is consumed by his desire to kill, and that is what leads him to his doom. He is pulled under by the whale and into the sea. He is destroyed by what he thinks he understands.

The rest of the ship and its crew are also destroyed, save for Ishmael, our narrator who seemed to disappear into the ship as the novel progressed. He is the lone survivor, picked up by another ship after floating in the sea for a day. He proclaims himself to be an orphan, abandoned to the sea by the crew of the Pequod. I felt for Ishmael then, as he understood what led to the demise of the men he had spent so much time with. The sea took them, not the whale, and I think that at the end, he realizes this.

At such length and with so much to discuss, I could go on for days about my thoughts of Melville's masterpiece. But I won't. I have to end it somewhere, so I will. Moby-Dick was a large adventure, with bits and pieces I'll never be able to forget. It is full of power and passion...and the American spirit. It was emotional and confusing, strange and familiar. It left me with a greater appreciation for what I cannot hope to understand about the sea and myself.

I am sure I will return to it again and again, with each new reading letting me discover more of its depths.

“...to the last I grapple with thee; from hell's heart I stab at thee; for hate's sake I spit my last breath at thee.”

*I am sure that there are many other people who have read this who would be far more eloquent than I in explaining just how wonderful of a book this really is. I cannot hope to convey how beautiful the language is. You just need to read it for yourself.*
Posted by Allie at 8:35 AM