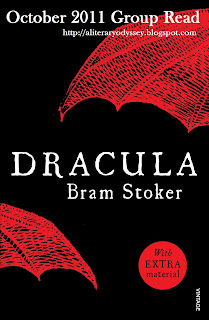 “Oh, the terrible struggle that I have had against sleep so often of late; the pain of the sleeplessness, or the pain of the fear of sleep, and with such unknown horror as it has for me! How blessed are some people, whose lives have no fears, no dreads; to whom sleep is a blessing that comes nightly, and brings nothing but sweet dreams.”

Oh Dracula. I have fond memories of you from the first time I read you. My high school offered a lot of electives in the English department, and one of the favorites was the "Mystery, Sci-Fi, Horror, and Fantasy" class. Dracula was the horror title that the class read (I feel like I should also tell you that we watched Poltergeist in that class as well. And everyone laughed at me when I started screaming and freaking out. My teacher took pity on me and let me sit in the hallway and read instead of watching the end).

But Dracula? I really enjoyed reading it for that class. This was back in 2001/2002, so it was before the vampire craze that seems to be everywhere now. I remember distinct moments from that class, like our teacher demonstrating how to "stake" a vampire. And her making a garlic necklace. It was FUN. I even remember our final project for the class...in groups, we had to create a skit based off of one of the scenes in the novel. Our group chose the "chase" scene at the end and ran around our downtown shooting images. It was a horrible skit, but it was a fun experience anyway.

Yes, fun. Because if I were to choose one word to describe Dracula, fun would be it. And on this read, I was reminded why I enjoyed it so much the first time around.

There are portions that are slightly frightening. The opening chapters, where Jonathan Harker is in Dracula's castle freaked me out this time around too (at one point I was reading in bed while Matt was in the living room shooting zombies, and I SWORE I saw red eyes staring at me from outside the window). The mystery and suspense of it all as Harker chronicles his thoughts in his journal are unnerving. As a reader, you aren't sure if he will make it (although, you assume he does because hey, we're reading his journal). When he begins to piece together what is actually going on in the castle, you get nervous for him. And then the narrative drops off and you get transported to London.

In London, we meet the rest of our characters-our two ladies and a host of handsome gentlemen who all love them ever so much. This is the one (big) critique I have of the novel. WHY do all the men LOVE their women so much? Why are they frail and sappy and in need of rescue? Blegh. No thank you. I like strong female characters and men who see them as such. not this nonsense:

“There are darknesses in life and there are lights, and you are one of the lights, the light of all lights"

“No one but a women can help a man when he is in trouble of the heart..."

“Good women tell all their lives, and by day and by hour and by minute, such things that angels can read. ”

“She is one of God's women fashioned by His own hand to show us men and other women that there is a heaven where we can enter, and that its light can be here on earth.”

I have more, need I go on? The fact is, all of the male characters fawn over these two women. They act like big saps and the women..it is all "Oh, I am so frail and fragile. I need you to protect me." It is just too much. Once I realized how ridiculous some of the "speeches" were to the women, I had to chuckle. Again, I like my strong female characters, so the mooning and sappiness of it all was just too much. And it never lets up. Ever. 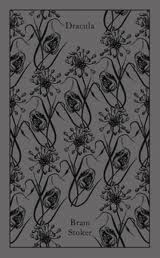 Even when Van Helsing, Harker, Seward, and the other men are chasing after Dracula, it is all about poor little Mina. Because she is beautiful, smart, and everything a man could want in a good woman.

As for the rest of the story, it has its highs and lows. I do think, that as a modern audience, we are spoiled by the countless versions of the story in various forms of media. Had we read this when it was first published, I think it would seem far scarier and out there than it does to us (in the world of Twilight and film). Vampire lore and legend isn't anything new, so as a modern reader, I think we expect a little more gore!

I can only imagine how some of the scenes must have terrified readers way back upon publication. There is a scene where Dracula is feeding on Mina (and vice versa) and the men (our dear heroes) barge in. THAT was horrifying! I can only imagine the reaction of readers back then!

Another of my favorite parts about this novel is the way in which it is told. I like that as a reader, we are learning as we go with the characters. Being able to read their journals, letters, and other bits as they discover who Dracula is really adds to the suspense and drama. I'm not sure if it would be as successful if we knew more than they!

In all, it was a fun story. It does seem to drag in the middle as the menfolk begin to put together the pieces, but the action picks up. I couldn't put the book down once I got to the halfway point! It was the perfect choice for a fall Group Read, and I hope all of you who participated enjoyed it!

“Once again...welcome to my house. Come freely. Go safely; and leave something of the happiness you bring."
Posted by Allie at 9:00 AM