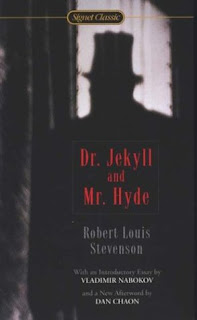 “Quiet minds cannot be perplexed or frightened but go on in fortune or misfortune at their own private pace, like a clock during a thunderstorm. ”

I sat down to read this one and ended up reading it pretty much in one solid go (I feel the need to be honest and say I fell asleep during the first time I sat down, so I started over the next time and finished it shortly after). It was a gripping story from the beginning-full of suspense, mystery, and great writing.

Okay, that might be a stretch. The writing isn't superb. Some of the "scary" or suspenseful scenes even seemed a little silly. But it was entertaining and interesting, especially because I wasn't familiar with the story...at all.

Yes, apparently I have been living under a rock for 26 years and didn't know who Dr. Jekyll or Mr. Hyde were.

Anyway, so I don't ruin it for anyone wanting to pick this up, I should leave my lack of knowledge behind.

Basically this is the story of Dr. Jekyll, a well-to-do man who gets caught up with the mysterious and mean Mr. Hyde. Dr. Jekyll's friends are confused by the choices he makes concerning his relationship with Mr. Hyde and attempt to step in. Shenanigans begin and soon, events spiral out of control into a kind of pseudo-tragedy.

It was wonderful. It was thrilling in that I didn't know what was going to happen next. Stevenson managed to keep a feeling of suspense until the very end, and when I finally realized what happened, I not only felt surprised, but only slightly stupid I didn't catch on sooner. :)

I'm not sure what else to say with spoiling it all over the place. Just take away that it was a wonderfully fast read, one that kept me on my toes, and didn't give me any nightmares (I cannot say the same for Matt's new video game. I slept with the lights on last night in fear of zombies coming to eat me).

I do think that I am going to have to read more of Stevenson's work in the future. Sadly, there were only two titles by him on my list and I have finished them both. I suppose that is something else to look forward to in the future.

Oh, are there any good film versions of this that I should watch?
Posted by Allie at 9:11 AM