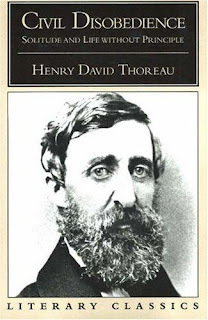 "If... the machine of government... is of such a nature that it requires you to be the agent of injustice to another, then, I say, break the law."

When Jillian posted that she was doing a Transcendentalist event from November 15 to December 15, I had the perfect books to read. In addition to this title, I also read Walden (my thoughts will go up later this week). Thoreau is very closely linked to Transcendentalism, so it was perfect all around.

I have very limited experience with what Transcendentalism is, as well as the writers associated with it. While I know we covered it in one of my college English classes, I think we merely glossed over the movement before diving into Emerson. From what I have found online, I see Transcendentalism as the belief that man and nature are inherently good. It is the structures, government, and organized groups that results in the downfall of man. For many who believed in Transcendentalism, their goal was to bring the focus back to the individual-that a single person could make a large and significant change by looking within themselves and reflecting.

It sounds interesting from an outside perspective, and I have been curious about Thoreau from references to him from all over my literary explorations. He is referenced often, so I was curious to see what I made of him.

I purposefully decided to give his shorter work, Civil Disobedience, a try first. At only 40ish pages on my Nook, it was the perfect length for an afternoon read. I found myself marking many passages that interested me. Essentially, Civil Disobedience is about Thoreau's ideas of individual rights versus organized governments. In this essay, Thoreau explains that it is the right and duty of an individual to question their government and refuse to condone acts that they disagree with.

Since this was published in 1849, it is important that the context be taken into account. Besides slavery, there is also the issue of the Mexican-American War in the South. Tensions were high across the country with the Western territories either accepting or forbidding slavery. Thoreau's essay makes sense in the context in which it was written. But I think it is important to point out that he doesn't just point out the flaws in government, but in individuals. He mentions that there are many who don't see the importance in critiquing their government, or questioning its motives.

Probably one of his most controversial ideas is when he says that the best way to protest or contest the government is to stop paying your taxes. Perhaps it was easy to get away with that in 1849, but I highly doubt a lot of people get away with that for long nowadays. But, he does point out that if a large group stopped paying, it would have a far larger impact than an individual.

Overall, I find Thoreau's ideas to be...interesting. I mean, I can see his point. I like the amount of passion he puts into his argument, and since this was a short piece, it seemed concise and relevant. What I found applicable to my own life is that as an individual, I have the choice to use my voice in the way I wish to. And if I find issue with the way my government runs, I should take advantage of my rights and voice that.

I do want to note that I took a lot of what Thoreau said with a grain of salt. He comes across as very....arrogant in this title. And while I could set it aside because I was interested in some of his ideas, at times I rolled my eyes. It read as very aggressive and condescending. I could be reading his tone all wrong, but at times his attitude seemed very over the top.

Probably the larger issue is that, well, how is this all even possible? How does Thoreau expect everyone to carry his ideas out? It doesn't seem feasible to me, at least in this day and age. Perhaps, in the era in which this was written, the issue of slavery could bind people together, but how would this all work today? I don't think even Thoreau would have an answer to that.

In any case, it was a great, short, introduction to the movement and beliefs of this group of individuals. And while it is not my favorite piece of writing ever, it is interesting to get this perspective of the early American spirit. I am curious to see what a longer piece will have in store.

"It is not a man's duty, as a matter of course, to devote himself to the eradication of any, even the most enormous wrong; he may still properly have other concerns to engage him; but it is his duty, at least, to wash his hands of it, and, if he gives it no thought longer, not to give it practically his support. If I devote myself to other pursuits and contemplations, I must first see, at least, that I do not pursue them sitting upon another man's shoulders."

Please visit this post to see more info on Transcendentalist Month and posts by other bloggers.
Posted by Allie at 10:00 AM