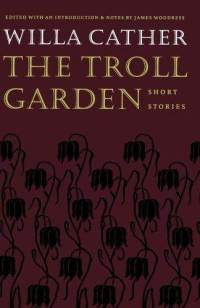 The Troll Garden was the first set of stories Willa Cather published and her first pieces of fiction. It was originally published in 1905 and contained 7 short stories:

Four of these stories were later revised and republished in 1920 in Youth and the Bright Medusa (I will be reading these at some point, so I will make note of any differences).

I was really looking forward to reading some of Cather's short stories, especially since the only story I had read prior to this project was "Paul's Case" (I actually use the story with my sophomores and their American Author research project. I was also looking forward to seeing the difference between her poetry, novels, and these condensed stories.

I was very excited going into the stories, and while there were some hits and misses, I really loved the collection as whole.

The first story, "Flavia and Her Artists" was a bit odd. The first few pages seemed a bit off-putting and I wasn't sure what point Cather was trying to make. The story takes place at Flavia's home, where she offers refuge to artists so they may explore their crafts. There is a bit of a mix-up when one of the writers attempts to hide an article written about Flavia. By the end of the story, I understood Cather's point, but I was not that excited by the story as a whole.

"The Sculptor's Funeral" is a story I really loved. The body of a famed sculptor returns to his small town accompanied by a friend. As the body returns to the town, the friend is forced to listen to the ridicule the town has towards the famed man. Eventually it reaches a climax and the friend goes off. :) It was an interesting read-especially in the context of life and death and what you can really mean to the people you leave behind. Definitely one of my favorites in the collection.

"A Death in the Desert" is about a young man who is often mistaken for his famous composer brother. On a trip, he meets with an ailing woman who once worked with his brother. The slowly get to know each other and discuss the old times with his brother pre-fame. Again, it was a pretty good story, but I wasn't as devoted emotionally as I hoped I would have been.

In "The Garden Lodge," a woman contemplates tearing down and destroying the Garden Lodge where she used to spend time with a composer friend. I think Cather's goal was to show the struggle between reality and dreams-and the choice that some make to go with reality-but I think it failed to come across strongly. I wasn't that big of a fan.

"The Marriage of Phaedra" is about a biographer of a famous painter, who is trying to find more information about the painter's unfinished work. Again, I think there was supposed to be a big moral lesson to this, but I really failed to pull it from the story. In my opinion, I think this was the weakest story of the collection.

"A Wagner Matinee" is one of the best of the collection. A young man is hosting his aunt in the city and decides to take her to a concert. He is worried that she won't be interested, but as the music starts, he watches her become more and more enthralled in the music. I loved this one. As a musician, I really loved the musical connections and the emotion Cather invoked just by discussing the effect of music on a person.

In all, this was a great collection of short stories. I'm looking forward to seeing Cather's later short stories, as well as the revisions made to some of these.