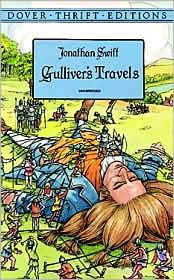 I am glad she decided to join in and I offered to post her thoughts here, since she does not have a blog of her own. So her are her thoughts about the second section of Gulliver's Travels by Jonathan Swift:

I really liked Book II where Gulliver finds himself in Brobdingnag and now he is the “small” person with the Giants now 12 times larger than he is, just the opposite of Book I and Lilliput.

The main difference in the two books is that Gulliver is looked at as more of a pet to the Giants. Where in Lilliput, Gulliver seemed to look at the people there as people.

He is also repulsed by the human body of the Giants-being able to now look at it up close and the vermin that prey upon the body. So it gives you a perspective of what is really revolting, the Giant people or the vermin who prey upon them, or both. Does this mean the Government and Royalty and then the regular society of people?

Gulliver thinks the society as mostly a moral people with just a few that are jealous or corrupt, the King’s jester, with a little malice at times. Just as Governments and Kings have also been at times.

Gulliver discusses the English society and government with the King and he then gives Gulliver his view and judgment by comparing them to Brobdingnag. This then causes Gulliver to take a different look and view point at the English. So it looks that if you take a step back, or remove yourself from a situation, you just may be persuaded to a different perspective of what you now think is what your government and society really are.

Gulliver is also knocked down literally by hailstones, and a few other things. He is also stripped of his clothes by the maids and is just a plaything to them. He is offended, but the maids do not see him that way and are just curious about him. Then a monkey takes him captive and treats him like a baby monkey. He has been reduced down, is this representing that the Giants are morally superior? Does this also mean that royalty and governments can do what they want, and the people are treated like pets, or do the people become a society where the corruption is low as that of Brobdingnag.

Gulliver escapes Brobdingnag. He is pampered by the royal family, but he is also treated as a pet. He misses being part of a society. He escapes by being at the sea shore in his traveling box and it is picked up by an eagle. An English ship finds his box in the ocean and he is rescued and brought back home. Everyone there now seems tiny to him and he is a giant. How his perspective has changed at first and as time goes on, it goes back to where he started.

I really liked this book. It helped to put both Books I and II together for me. Not having read Gullivers Travels before, it is really starting to come together. Thanks Allie for inspiring me to read this. Didn’t know what I was missing. There is so much you can compare and insinuate in all of his situations he comes into. You can really look at today’s world and put it into this book.