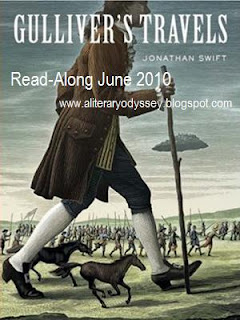 Last week the participants in my Gulliver's Travels read-along discussed the first part in Swift's satirical travelogue. In that first section, the reader learns about Gulliver's past life and the first of the four journeys he writes about in his book-his voyage to Lilliput, land of the little people.

In this second section, Gulliver embarks on yet another sea voyage, completely ignoring the fact that the first time he did so, well, it didn't turn out well.

Gulliver and a small portion of the crew travel to a piece of land to scout. Gulliver, being the overly curious man that he is, goes off alone to scout and upon returning to the boat, he sees them escaping a giant in the water and leaving him behind!

He then runs into some friendly giants, one of whom takes him in. Gulliver refers to this man as his master, although it is clear that this man is using Gulliver to make money-showing off poor little Gulliver as if he were a freak in a circus side-show. They slowly make their way to the capitol, where thankfully, the queen rescues Gulliver from the evil man he called master and sets him up as a favorite in her castle.

There is the usual in Swift's humor and awkward situations for Gulliver. From being attacked by a dog in the gardens, to being caught outside in a massive hailstorm, Gulliver's size, once again, allows for some funny situations.

I will say that while Gulliver viewed the Lilliputians as people worthy of learning from, it seems as if the people of Brobdingnag see Gulliver as only a curiosity and they really have no desire to get to know him or his customs very well. It is an interesting difference!

The events here are obviously contrasting what we saw in the first book and Gulliver's journey to Lilliput. If you recall, the Lilliputians are prone to violence and war with their neighbors, wheres as the...Brobdingnagians (?) seem to be a fairly peaceful people, even given their size and strength. Most of all, it was this difference that struck me in this reading.

Given what I know about the political stance around the time that this was written, you can tell that Swift is definitely giving us something to chew on, like he probably did with his readers at the time. The discussion on whether it is better to make up for your country's faults through war, or to refuse to fight and travel is an interesting question.

In particular, there was one passage in this section that really spoke to me. And while it is long, I wanted to share it with you. In this chapter, Gulliver is talking with the King about his own people and that of Europe:

"My little friend Grildrig, you have made a most admirable Panegyrick upon your Country. You have clearly proved that Ignorance, Idleness, and Vice are the proper Ingredients for qualifying as a Legislator. That Laws are best explained, interpreted, and applied by those who Interest and Abilities lie in perverting, confounding, and eluding them. I observe among you some Lines of Institution, which in its Original might have been tolerable; but these half erased, and the rest wholly blurred and blotted by Corruptions. It doth not appear from all you have said, how any one Perfection is required towards the Procurement of any one Station among you; much less that Men are ennobled on Account of their Virtue, that Priests are advanced for their Piety or Learning, Soldiers for their Conduct or Valour, Judges for their Integrity, Senators for the Love of their Country, or Counsellors for their Wisdom. As for yourself (continued the King) who have spent the greatest Part of your Life in travelling; I am well disposed to hope you may hitherto have escaped many Vices of your Country. But, by what I have gathered from your own Relation, and the Answers I have with much Pains wringed and extorted from you; I cannot but conclude the Bulk of your Natives, to be the most pernicious Race of little odious Vermin that Nature ever suffer to crawl upon the Surface of the Earth," (120-121).

I love that Swift is pointing out the faults of his own government, and how others must have seen them. I am one who believes that we need to see ourselves how others perceive us as well as how we might want to be seen. The King also lectures Gulliver on the violence of his people and tells Gulliver that "certainly we must be a quarrelsome People, or live among very bad neighbors," (119). This is another example of Swift discussing politics of his government and the constant need for war in his time period.

In all, I really enjoyed this section. It is far more political and detailed than the first, but I liked the contrasting natures. I remember really digging into this section in college, but not liking it that time. I guess it goes to show you that re-reading can serve a great cause!

I am looking forward to reading your thoughts, as well as getting to the third section. To be honest, the third section is the part I don't remember, so I am hoping that something sparks my memory in a good way!