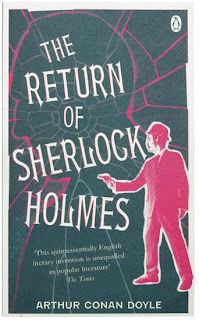 We last left Watson searching the cliffs for evidence of Holmes' body at the end of The Memoirs of Sherlock Holmes. Holmes met his equal in the dark and mysterious Professor Moriarty. Watson assumes Holmes for dead after searching the "crime scene" and reader was left feeling cheated.

After the publication of "Memoirs," Doyle was done writing about Holmes. He never intended for Holmes to become so popular and refused to write more stories featuring the detective. However, public outcry and anger convinced him to give it another go.

So here was Doyle's problem: How does he bring Holmes back to life after already "killing him off?" The answer comes in the first story in The Return of Sherlock Holmes, "The Empty House." Three years have p 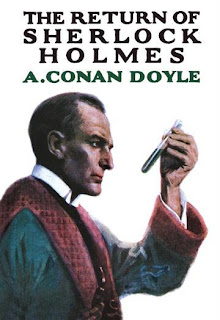 assed since Holmes met his end, when all of a sudden, the detective returns and reveals himself to Watson. Personally, I felt cheated. I'm not going to give away how Holmes escaped, but let me just say that I felt Doyle gave an easy solution to the problem, fitting to bring Holmes back to life.

Nevertheless, these Holmes stories are just as exciting and as eventful as the other two collections I have read to date. Again, there is a slight increase in the darkness and violence of the collection as I found in the previous set, but all the stories seemed to be well developed. I just think Doyle was leaning towards the more sinister to give a darker tone to the actions of everyday people. There is also some confusion as to time period, since the stories don't follow themselves one after the other in chronological order. Instead, our trusty narrator Watson pulls files from different years and fills us in on the details.

Speaking of Watson, I have to go back to the issue of his wife. In the first story we learn that Watson is recovering from "bereavement," which I am assuming is the death of his wife, 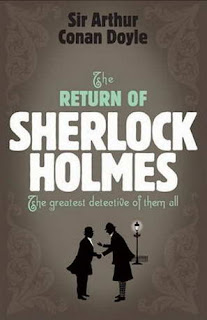 since she disappears. Watson also moves back to Baker street to again, live with Holmes. Now, while I understand why Doyle would give Watson a romantic interest in the manner of foiling him against Holmes' harsher characteristics, couldn't he have given her a better send off? It seems like Doyle wasn't sure how to bring Watson and Holmes back together again, so killing off Mary was the easy way. Granted, it makes Watson easier to believe when mysterious strangers show up to see Holmes and he is there, but it irks me anyway. Why bother giving him a wife in the first place if all she did was get in the way?

I also had quite a few favorite stories. "The Dancing Men" stole the collection with a tale about dark and mysterious pasts mixed with a clever code that Holmes was able to break. It seemed like a far more realistic mystery to solve and for that reason I truly loved it.

"The Solitary Cyclist" was another that I enjoyed, even though it was on the creepy side. A young woman must bike alone twice a week to the train station to make it home, but is followed by a strange man. The results were a little scary and I really felt for the poor damsel in distress! 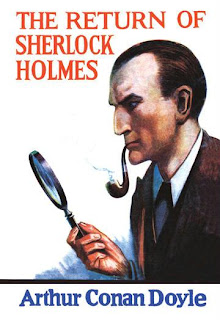 I also really enjoyed "The Three Students." Rather than lean towards violence like many of the other stories did, this story was about perception and seeing things for what they really are. A professor accidentally leaves answers to an important exam on his desk while he is out and he returns to find them missing! The resulting confrontations with the three student suspects was a great way of reminding myself that appearances are always deceiving.

"Charles Augustus Milverton" also showed a darker side of humanity, as a man known for blackmailing the wealthy came head to head with Sherlock Holmes. I love that Doyle begin to explore the seediness and depths of human nature in these stories and it was at its height in this one.

The last story I truly enjoyed was "The Six Napoleons." A number of Napoleon busts are smashed throughout the city leading Holmes and Watson on a chase to figure out why someone is destroying the images of Napoleon. It was a much light story than any of the rest and fun to read! 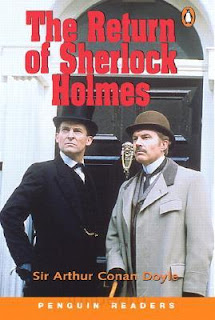 Overall, it was another collection of great Holmes stories. I can definitely see the progression from where Doyle began. Holmes is becoming more than just a shadowy detective. We can see glimpses of his own humanity more and more as the stories develop and I am beginning to grow rather fond of him.

However, I am curious to see how Doyle is going to end it all after two more novels and two more short story collections. He already finished Holmes off once. Will he again? Or will he leave it open for us to interpret? I cannot wait to find out.

I do know that I am beginning to develop an appreciate for the skill it takes to write mysteries. There is a complexity there that is something new to me, and try as I might. I never guess right (although I AM getting closer to understanding Holmes' methods).

In any case, I think I will be incredibly said when this Holmes journey comes to an end.

The Hound of the Baskervilles is next!
Posted by Allie at 10:43 AM