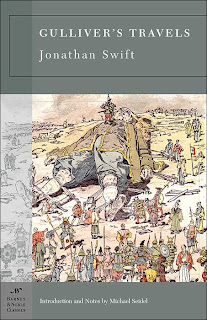 I am glad she decided to join in and I offered to post her thoughts here, since she does not have a blog of her own. So her are her thoughts about the last section of Gulliver's Travels by Jonathan Swift:

Book 4 of Gulliver’s Travels takes him off again, this time as a captain of a merchant ship. He hires replacements for his crew who became ill and they turned out to be pirates and organize a mutiny on his ship. They end up setting him free on the .

Here the Houyhnhnms are horse’s who run the and they are clever and sweet smelling. Gulliver again learns to converse with the Houyhnhnms. They live a good clean life with no lies. They are a rational, uncorrupted, innocent, polite and moral society. Gulliver likes it here and doesn’t want to ever leave.

The slaves are human creatures called Yahoo’s. They are filthy and smell. They eat meat and garbage. He sees them as vulgar and they throw their excrement at one another. He compares the two and places himself somewhere in the middle. His clothes are what makes him different from the Yahoos and helps the Houyhnhnms accept him as different. Gulliver tries to become more like the horse and not like the human Yahoo’s.

Gulliver explains his society and war and the reasons for it. He basically is explaining the justification of reasons countries go to war, take over land and its people. He also explains how lawyers use laws and reasons to justify their means. Gulliver goes on to explain how money can corrupt; how the rich can buy gourmet food and then become unhealthy.

Gulliver lives with the Houyhnhnm’s for three years and he starts to imitate the horse by walking, speaking and acting like them.

The Houyhnhnm hold an assembly every 4 years, which shows that they have no problems living peacefully together. The horses become frightened with Gulliver trying to be like them, he is more a Yahoo and they want him to leave.

They help him build a boat and he ends up eventually being taken aboard a Portuguese ship where the captain convinces him to return home to his family.

His family is happy to see him again, they thought he was dead, but he cannot stand the sight or smell of his Yahoo-wife and children. He sees himself in the worst way and his pride is in disarray. Over time he reasons to change his thinking and starts to come back to normal.

This book makes you stop and think about ourselves, our own society, country and world. He takes a look at himself in different situations throughout the book where any one of us could see ourselves dealing with moral, political and societal issues today. The truth and pride we each have is what Gulliver himself is struggling with in his adventures.

In the end, I really like the book. It was thought provoking. You can read it for the enjoyment of the story as it is, but when you look at what issues he is raising, it also becomes much more, which I am sure is what he wanted.