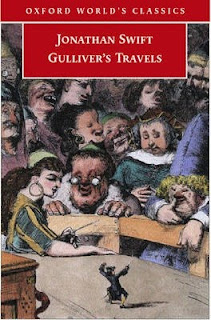 I am glad she decided to join in and I offered to post her thoughts here, since she does not have a blog of her own. So her are her thoughts about the third section of Gulliver's Travels by Jonathan Swift:

Book Three is a lot different from the first two books. Gulliver is once again taken to a different world where he is lifted up to a flying island, Laputa. He goes into detail on how the moves and operates. The people have a short attention span and are mainly concerned about math and music. They worry that the sun will go out and do not realize their women are having affairs with the people of Balnibarbi. The King of Laputa can cause destruction to Balnibarbi at any time. To me this probably represents some control would have had over another country during Swift’s time.

He moves on to the other lands of Luggnagg, Glubbdibdub and then onto so he could return home. During his adventure he is allowed to talk with “ghosts” of past leaders. I found this to be really interesting because during his talks with these people it is insinuated that things were not as they seemed or events may not have been exactly as they are told through history.

I started to think, who would I like to talk to if I could. I think George Washington, Abraham Lincoln and Benjamin Franklin are up there for me. Just to know where they were actually coming from and what our leaders today use in their perspective of what these leaders meant at their time in history, I think would be interesting to talk with them about.

Quite a different book from the first two-looking forward to Book IV.